“Legible Once Again”: An Archive of Early Histories by Women

This archival exhibit calls attention to the long history of women’s historical writing, a history that is sometimes less-than-legible in conversations and collections that focus on the discipline as traditionally defined. In assembling this archive, I take inspiration from the work of Megan Matchinske, who has argued that rendering "women’s historical writing legible once again” requires that we understand how women wrote around the traditional historical forms that were often denied to them—and that failed to represent their lives and experiences.

In this archive of early women’s histories, I have collected works that range well beyond the genres that are often associated with history: annals, chronicles, and national and universal histories. I have included some of these forms, but I have also collected memoirs, biographies, diaries, dramatic works, adaptations for children, and the many other forms of writing about the past that provided women a space to make their own histories legible.

[Here, you might talk more about how you hope your users would engage with your exhibit; you might also add a separate section on using the archive, as well as your selection principles.]

[Here, you might provide more context for these images and discuss some limitations of the available record.]

A Timeline of Histories

[This is a partial sample of the early histories by women available in the DPLA; if a goal of your archive is comprehensiveness, you would likely want additional examples. By contrast, your exhibit might focus on a smaller number of items, but with more detailed framing and information. You would want to think about—and perhaps even discuss—the impact of presenting your materials as a timeline. You could also think about the limitations of the metadata (Hutchinson's Life of Colonel Hutchinson was first written in the seventeenth century; the date in the DPLA's records, which controls the timeline placement, is for a later edition.) ]

[You can also link out to or otherwise include materials that are not in the DRS or the DPLA; just make sure to provide an appropriate framework and be thoughtful about what these materials are contributing to your exhibit.]

Words Closest to "Historical" in WWO (novels)
1 historical
2 prints
3 romances
4 writers
5 writer
6 authentic
7 romance
8 authors
9 fictitious
10 richardson
Words Closest to "Historical" in WWO (full corpus)
1 historical
2 biographical
3 history
4 geographical
5 collections
6 edited
7 engraving
8 quotes
9 biography
10 sketches
[You can also use the tools you have learned this semester in building your archive. Here, you could talk about the creation of these different corpora and discuss what you find significant about these results.]

The Life of William Cavendish 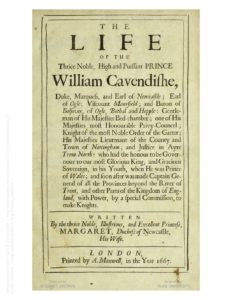 In The Life of William Cavendish, Margaret (Lucas) Cavendish, Duchess of Newcastle, asserts that:

Although there be many sorts of Histories, yet these three are the chiefest:
1. A General History.
2. A National History.
3. A Particular History…

Cavendish goes on to outline the qualities of these three sorts of histories. The first, she says, has some limited utility; it is "profitable for Travellers, Navigators and Merchants" but the second is "pernicious, by reason it teaches subtil Policies, begets Factions, not onely between particular Families and Persons, but also between whole Nations, and great Princes, rubbing old sores, and renewing old Quarrels, that would otherwise have been forgotten." However, the third kind of history, the kind that Cavendish herself has written, is "most secure" because it "goes not out of its own Circle, but turns on its own Axis, and for the most part, keeps within the Circumference of Truth."

Cavendish's description of the autobiography as a historical genre equivalent to national and general histories, and—in fact—as a superior form of history makes a bold claim for the kind of history she is writing.

[Here, I could go on to add more detail about the publication of this work and discuss its importance for the archive I am building.]

I would like to thank the whole CERES Toolkit team, and Sarah Payne in particular, for their assistance in creating this exhibit.

[Don't forget to include your sources and credits for those who helped you create your archival exhibit.]