What motive do authors—specifically authors of Inkle and Yarico retellings—have when including religion in their texts?

When starting out with this assignment, I had no idea if I would get any useful results since the document I chose was only 1 page, consisting of around 222 words. When I started writing out my document, I wrote everything in plain text and the only “design” that it consisted of was separating each stanza (each four lines). Also, after reading the document for the first time, I was not able to create a research question. After several readings and using the tools mentioned in this post, I was finally able to decide on one. For this assignment, the tools I used to analyze the text were WordCounter, WordTree, and SameDiff, where the text I compared to in SameDiff was Richard Steele’s Inkle and Yarico. Each text analysis tool bred different but equally useful results that allowed me to analyze the text in different ways. The word tree offered many insights on the general motive behind Yarico’s words. Since most stanza’s in this poem started with either the pronouns “Thy” and “I”, I used the WordTree tool to search for trees with each of those words, and what resulted was very informative. For “Thy”, all of the sentences talked about Inkle’s horrible actions and how much pain they have caused Yarico, and this includes the reverse tree too! Similarly, for the pronoun “I”, the sentences that came before and after it described the pain that Yarico was in and emphasize the emotional mood of the poem as a whole. 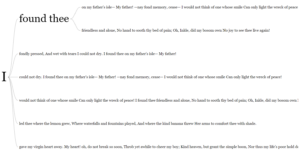 The other tool that I used that I found interesting was WordCounter. The top three words in my document were “thee”, “thy”, and “heart” which were mentioned 6, 4, 4 times respectively. Finding this out was helpful because it relates to the central idea of the poem that is mentioned in the above paragraph, which is Yarico expressing her sadness and pain about Inkle’s actions. Since this poem is from Yarico’s point of view talking to Inkle, “thee” and “thy” refer exclusively to Inkle and the mentioning of “heart” connotes to the love that Yarico has for Inkle, considering that in this poem she forgives him even after all that he did.

Finally, with the use of the SameDiff tool I found two very interesting results. The top words that both this poem and Steele’s version of Inkle and Yarico had were “yarico”, “inkle”, “found”, “did”, and “love” which by themselves can almost form a sentence describing the poem. From this result we understand that both Richard Steele’s Inkle & Yarico and Yarico’s Lament revolve around the characters Inkle and Yarico and the love that is between them, which readers of both texts realize is unrequited by Inkle. The second result I found interesting from SameDiff is that “indian” and “indians” are mentioned in Steele’s version for a total of 0.002% of the whole text while nothing is mentioned about Yarico’s race in Yarico’s Lament. The inclusion of race in the text (or lack there of) can change the readers’ view depending on where the reader is from, so not mentioning race one bit in Yarico’s Lament was interesting. Something that Yarico’s Lament does include, though, is the mention of religion and how Inkle is associated with the Christian faith, which is evident when Yarico mentions “And teach me how the Christians pray;”. This exact quote from Yarico’s Lament is what led me to my research question.

Richard Steele’s Inkle and Yarico did not mention Christianity at all throughout the text, which is why I was surprised when Yarico’s Lament mentioned it. Yarico’s Lament, for the majority of the text, focuses on portraying Yarico’s sadness as a result of Yarico’s actions, so Yarico saying “And thou didst swear to love me, then, And teach me how the Christians pray” can be interpreted as an attempt to separate Inkle’s actions from Christianity and portray the religion as something that Yarico was looking forward to learning more about. Looking at the metadata it becomes evident that the publisher of this text is The Family Magazine based in New York, and the text was published in 1839. This provides a lot of context as to why the author would portray Christianity like that, considering it was designed for a family magazine in New York, even prior to the abolition of slavery in 1865. On the other hand, Richard Steele was the co-founder of the magazine The Spectator, so he did not face as much pressure as R. Dawes with publishing Yarico’s Lament.

In conclusion, the society that an author lives in and their position within that society can greatly influence how they incorporate religion into their texts, whether it be writing in a negative or positive spotlight, or not include it at all.