It’s undoubtedly true that J.K. Rowling’s Harry Potter series is a set of classic YA novels with characters that many readers look up to. Unfortunately, the popular books do not have a stellar reputation in terms of gender representation throughout the series. Not only are female characters vastly outnumbered by men, but the male characters also have more well-rounded development and control of the story. In this article, I will explore what emotions and traits are associated with male versus female characters as well as the imbalance between genders, then what this means and why it matters in the first place.

Before we get into the results of the word vector analysis, here is a brief explanation of what it is and how it works. The first step for this project was creating a text corpus out of the entire series. This is composed of plain text files of every book, with the data being “cleaned” through removing the page numbers and chapter names that were in every page of the text. After finishing the removal process, the file was uploaded to R Studio, where a model was created and trained to look through the texts and make queries that revealed the relationships between words. The queries involved character names, occupations, pronouns, gendered nouns, emotions, and more, in order to search for gender imbalances and associations for different words.

First of all, here are the top 15 words closest to each member of “the Golden Trio ,” also known as Harry, Ron, and Hermione (after their own names): 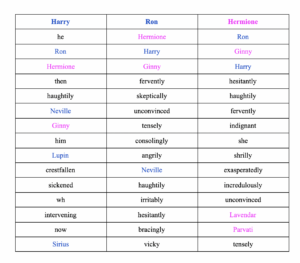 On a basic level, the chart shows that these three characters are associated with each other, and have some words in common due to how often they are together. However, it is interesting to look at the subtle differences in the adverbs that were close to “Ron” and “Hermione.” The implications of Ron’s adverbs such as “skeptically,” “consolingly,” and “irritably” show a well-rounded character who experiences anger/irritation in addition to being supportive and cautious. Alternately, Hermione’s adverbs portray her as more irritating and annoying, with the least negative connotation being extrapolated from “hesitantly.”

In Meredith Cherland’s “Harry’s Girls: Harry Potter and the Discourse of Gender,” she points out that the Harry Potter series upholds humanistic binaries that “preserve hierarchies” and “are harmful to women and other groups of people because they make invisible the structures that subjugate them” (Cherland 274). The male/female binary is upheld in many ways, but one is through the foil of Harry and Hermione (Cherland 278). As previously mentioned, Hermione is characterized negatively, and can be described as “acerbic and cranky” (Thomas 62). Alternately, Harry is this idealized hero who represents the “good” in the good/evil binary of the story. Hermione’s “shrill” manner, paired with her irrationality yet well-timed bursts of knowledge, make her the irrational foil to Harry’s rationality; she serves to make him look better. It is certainly harmful for women to see themselves represeted as a sidekick type who is only helpful when it serves the male protagonist.

In addition to what the adverbs reveal, the character name associations are also indicative of misogyny within the world of Harry Potter. Including repeats, eight male names versus seven female names being associated with the Golden Trio does not seem like much of a discrepancy. The issue arises from who is associated with who and why. Aside from the Golden Trio being highly associated with each other, Ginny is the only other female character close to Harry and Ron. This closeness is a result of the relationships of romantic partner and sister that she respectively shares with the two. In the series, Ginny is largely defined by her relationships to other characters rather than her own actions, which is reflected in the words closest to Ginny: 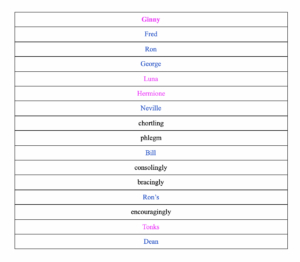 In the top sixteen closest words to Ginny, excluding herself, there are seven male names versus three female names, and very little else to go on other than adverbs that reflect Ginny’s reactionary nature rather than being active in the plot. To reiterate the previous point, Ginny is highly associated with Harry and Ron not because she is some “strong female character,” but because she is the girlfriend/sister character that the male heroes need. Furthermore, It is a well-known trope that “strong girls are presented as being strong because they have older brothers,” and, as the youngest and only female Weasley child with six older brothers, Ginny’s rare bursts of bravery are accredited to them (Gilmore 19). In terms of her relationship with Harry, “Ginny is positioned as a dangerous temptation” that threatens to take Harry off the path of reason and towards emotion (Cherland 277). Her lack of personality sadly makes her more of an end goal for Harry rather than her own person.

As for the closeness of Lavendar and Parvati to Hermione, the fact that they were close to the only other female character shows a gender divide even in character relations. This divide is further emphasized by the closeness of “Harry” to “Lupin” and Sirius” — two characters with huge impacts on Harry and influence on the story that just so happen to both be male.

The former of those characters is at one point a Hogwarts professor. Below are the closest matches to “professor” with a gendered pronoun: 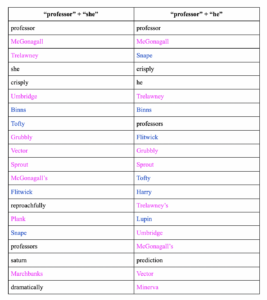 While at first glance, there are many women, only a couple of those characters are both present-day professors and have significant amounts of interactions with the protagonist. Below are the results of the words closest to relevant professor names without the word “professor,” with the addition of “Dumbledore” without “headmaster” since he also plays a significant leadership role throughout the books. First, we have the women: 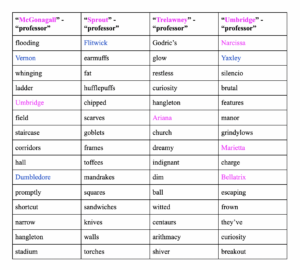 Out of four, only two of these female professors are vaguely characterized beyond their professions. McGonagall is associated with terms like “staircase” and “corridors,” establishing her as a mere fixture of Hogwarts that sternly speaks to Harry from time to time. Similarly, Sprout is associated with the building and herbology, as shown through “mandrake.” With Trelawney and Umbridge respectively, there is at least a slight hint at their characters from “restless” & “dreamy” and “brutal” & “frown,” respectively. Notice how none of these women have positive characterizations. Let’s see if the male professors and headmaster have significance outside of their jobs: 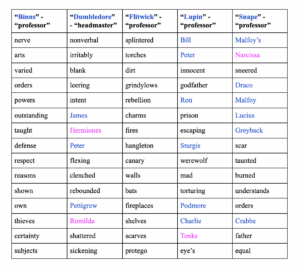 While Flitwick’s close words are admittedly a little weaker, the male professors are clearly more well-rounded than the women. From their descriptors, personalities are easily derived, and there’s more intensity in the language used, automatically making them more intriguing. This highlights a glaring problem in Harry Potter: while it is fine to make your protagonist a man, male characters outweighing females in both numbers and importance is a problem due to the impact on the readers: although not intended, it feels like the underlying message is that men are more important than women.

Years after the ending of the Harry Potter series, why does its terrible gender representation still matter? As Cherland put it, one must wonder what it’s like “not to see one’s self in a text that everyone adores and celebrates” (Cherland 279). If enduring patterns in literature continue to set behavioral standards, how do we break men and women out of these harmful binaries, let alone make room for those who exist outside of the binaries? Until they are acknowledged and broken down, the cycle of binaries will continue.