The Complaint of Yarico is a poem written from the perspective of Yarico. Specifically it focuses mainly on her suffering. However it also gives insight into how she views herself and the others around her. The question in which I would like to explore is to what extent does Yarico’s use of negative language within the text influence readers to sympathize with her?

This poem was originally published in the Baltimore Weekly Magazine in the year 1800. This article was published in the city’s weekly magazine and is marked as entertainment so it is safe to assume it was meant to reach a wide range of readers. It is also important to note that this was written during a time when views on colonialism were beginning to undergo change amongst the general public.

Throughout the poem Yarico expresses her deep feelings of sorrow, betrayal and anger towards Inkle. When analyzing the poem one of its most noticeable characteristics is the increase of negative words used compared to the original text. Words that I will classify as negative will be those that traditionally do not have positive connotations. When I ran the text through Word Counter, negative words such as hate, cruel, wretched and betray’d came up frequently, each appearing twice within this short text. The text is roughly 292 words long (some words within the text could not be read due to it being illegible within the original source). Other than negative language the words that appeared the most were “you” which showed up 13 times, “her” which showed up 8 times and “your” which appeared 6 times. This is reasonable considering the poem is all about Yarico complaining to Inkle about his betrayal. 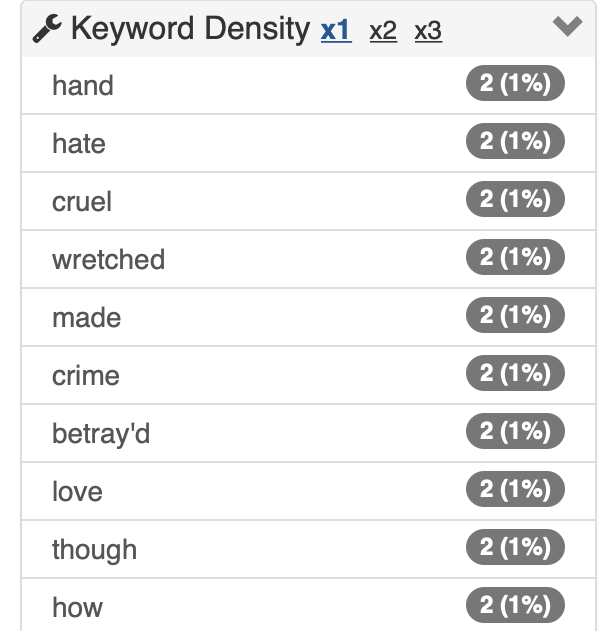 Unlike other versions of this text The Complaint of Yarico does not clearly specify Yarico’s race. However it is made clear that she is viewed as inferior due to how she describes herself and her people. She uses negative language throughout the entirety of the poem to describe nearly everyone that this brought up. For example she describes herself and her people as “savage”, “barb’rous” and “wretched”. The most positive language that is used is “love”, which appears twice within the poem.

Overall The Complaint of Yarico clearly depicts how upset Yarico is with Inkle. Readers are able to sympathize with her because she clearly feels as if she’s been wronged. The language she uses is strong and is meant to evoke emotion. She uses phrases such as “For what unwilling crime am I betray’d: Is it because I lov’d?” and “Fain would I learn from whence your hate arose, The cruel cause and fource of all my woes”. Although Yarico’s portrayal within the poem is able to generate sympathy amongst its readers, at the same time the language she uses manages to put a divide between her and the main audiences of this text. She is portrayed as a sympathetic character however she describes herself as wretched, her people as savage and her home as barb’rous. None of these words evoke positive imagery and do not tend to generate sympathy. It makes it seem as if Yarico is not an equal and that she just happens to be one of the good ones. In conclusion I would say that Yaricos use of negative language influences readers to sympathize with her to a certain extent.

In turn I believe that metadata tabs that would be most beneficial for this text are: POV, genre, publication date, publication location, positive/negative language, Yarico’s race, if Inkle is forgiven by Yarico, and word count.