James (Jimmy) Hoffa, the Teamers Union president who vanished in 1975

World War II was a period of unprecedented change for labor unions and civil rights groups in the US. Roles for workers, women, and minorities evolved due to the need for large-scale mobilization and production to support the war effort. President Roosevelt signed executive order 8802 in 1941, which prohibited racial or ethnic discrimination in the defense industry. This was the first nation-wide ban on employment discrimination. Roosevelt's executive order also established the President's Committee on Fair Employment Practice as an enforcement mechanism.

As unions gained power in the wartime industry, they followed internal non-discrimination policies in keeping with the president's directive on equal opportunity. However, the official nation-wide policy of a union was not always reflective of the practices of its local branches. By the onset of WWII, the International Brotherhood of Teamsters, Chauffeurs, Warehousemen and Helpers of America (AKA IBT or the Teamsters) was already one of the most powerful unions in the country. This archive delves into the tension that arose during this time period between the actions of local union leaders and the enforcers of newly codified anti-racism protections. 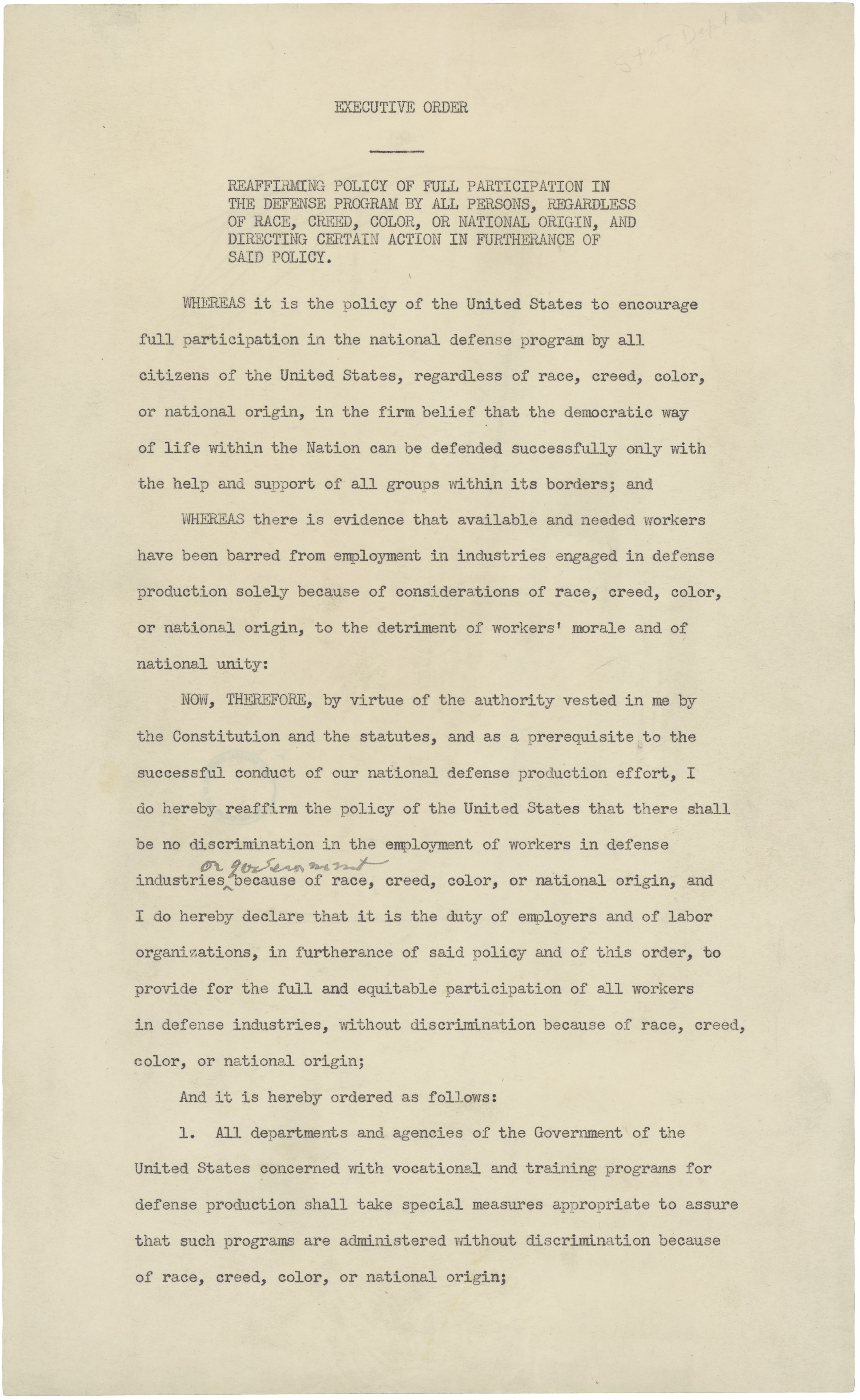 The Story of this Archive

The letters in this archive were gathered by my grandparents, Estelle and Ralph James, for their 1965 book Hoffa and the Teamsters: A Study of Union Power. Jimmy Hoffa is a well-trodden subject for historians, many of whom seek to make sense of his complicated legacy. These documents from the 1940s were collected in the 1960s - at the height of Hoffa's power - and they were selected because of their relation to him.

This is not his story.

This is primarily the story of a man named Festus Hairston, of whom virtually no one has heard of. Hairston was a truck driver in Detroit during World War II, and like many African-Americans he was denied the chance at a better job because of his race. The leader of his local union denied his request to transfer to a job in long-haul trucking, for which he was well-qualified. Amidst the Detroit Race Riots of 1943, and despite immense pressure to stay in his lane, Hairston lodged a formal complaint with the national president of the Teamsters Union. When that proved ineffective, he took his case to the newly created Presidential Committee on Fair Employment Practice. Within a few years of Hairston's initial filed complaint, 21 other people had come forward with accusations of racial discrimination. There was enough evidence to hold a public hearing and bring charges against the Teamsters.

This is also the story of long-held racist beliefs coming into conflict with the unprecedented anti discrimination laws of the WWII era. African-Americans were barred from the higher-paying long-haul trucking jobs, because it would have required sharing meals and a sleeping cabin with their white coworkers. The federal government's insistence on equal opportunity was a practical matter: there were not enough long-haul truck drivers, and the war effort required a high volume of long-distance transportation. The President's Committee on Fair Employment Practices existed only for the duration of WWII, and FDR's non-discrimination executive orders were similarly short lived.

Hairston's story is preserved here because of his coincidental proximity to power. His local union leader in 1940s Detroit was Jimmy Hoffa, who would go on to become president of the Teamsters and one of the most influential labor leaders in American history. Decades before he became a household name, Hoffa was the one who denied Hairston's request for a transfer to long-haul trucking. In the face of overwhelming institutional racism, Hairston is a reminder of how much power an individual has to disrupt the status quo.

Selection Principles and How to Navigate this Archive

The files in this archive are part of a much larger collection of papers related to Jimmy Hoffa that have been in my family's possession for over 50 years. I found Hairston's letter lurking in a subset of papers from the WWII era. It was embedded in a larger narrative about Hoffa's career trajectory, but it is presented here as the primary focus of its own archive. I have included all the information in my possession that might provide context for the events that transpired. Unfortunately, there is very little primary source information available from Hairston beyond his initial letter. The only private correspondences that I have access to were written by leaders of the labor movement, who clearly viewed Hairston as a nuisance. I hope that readers of this archive will seek to read between the lines and see Hairston's letter for the act of courage that it was.

Casual visitors of this archive can peruse the key documents that are displayed with summarizing quotes next to them. Documents that are displayed by themselves can be clicked on and examined with a magnifying feature. Anyone looking for a more in-depth understanding should consult the key players section for context, and then scroll through the timeline. The captions I've provided refer to specific people by name, so they will be hard to follow without having first read about the key players. I've exercised my judgment in deciding which documents to pull out and display individually, but the timeline features every relevant document in my possession.

"At present Mr. Tobin, there are no Negroes employed in this type of work from local 299.

I find this type of work from past experience, my very best in aiding Defense.

There is no question of the Negroes patriotism or sacrifices for the preservation of our Democracy."

Festus Hairston: a truck driver and a member of the Teamsters who was denied a job in local 299 because of his race.

Jimmy Hoffa: the future president of the Teamsters; at this point in time he was a leader of Teamsters local 299 in Detroit.

Daniel Tobin: national president of the Teamsters Union. He was also the chair of the Labor Division of the Democratic National Committee and appears to have had a collegial relationship with FDR.

Thomas Flynn: the secretary-treasurer of the Teamsters and Tobin's right-hand man. Tobin's letters are signed by Flynn acting on his behalf, and it is unclear to what extent they were written by Tobin or Flynn.

William Green: president of the American Federation of Labor (AFL), which was a national federation of labor unions that included the Teamsters.

Boris Shishkin: head of the President's Committee on Fair Employment Practices, which was created to enforce wartime anti-discrimination laws.

Note: not all the key players have photos that were publicly preserved. We don't know what Hairston looks like, and readers are invited to consider how much power has historically been required to have one's likeness preserved.

"This office understands that there is a twelve state agreement or "understanding" among locals of the Brotherhood of Teamsters, Chauffeurs, and Helpers that no Negro truck driver will be permitted in long haul interstate operations, one reason being that long haul truck driving necessitates the drivers' sleeping on their trucks, sharing the one bunk available."

Statement of Charges Against the Teamsters and Order for Hearing

The President's Committee on Fair Employment Practice finally pursued charges against the Teamsters after 21 more people came forward with discrimination cases. This is the list of people who came forward and were named in the case: 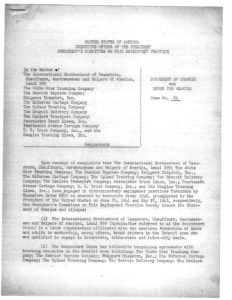 Unfortunately, it is not clear what became of the anti-discrimination case that was brought against the Teamsters. A record of the hearing has not been digitized, and traveling for archival research is outside the scope of this project. It is clear, however, that workplace discrimination continued well past 1945, and indeed still persists to this day. FDR's anti-discrimination executive order was limited to the defense industry, so the committee was terminated in 1945. Curiously, Tobin's 1951 letter to Hoffa expresses concern that a racial discrimination complaint could be "brought to the Governmental Agencies." It is not clear to which agencies he is referring, but it is clear from the complaint that the Teamsters' policy of prohibiting African-Americans from being long-haul truck drivers continued after the WWII era.

Hairston's letter may not have ended the practice of racial discrimination, but it did capitalize on new anti-discrimination protections to hold union leaders accountable. In the 1940s, the idea of litigating racism in the workplace was radical and unprecedented. This era of improved rights for minorities can be viewed in part as a precursor to the Civil Rights Movement. The Civil Rights Act of 1964 had precedent in FDR's executive order, and was bolstered by the old truism that it is far more difficult to deny people their rights when they can remember having them.

And what became of Festus Hairston? Unfortunately, there is not much historical record of him after his interactions with Hoffa. There is a patent that was filed in Detroit in 1945 by a Festus Hairston, for a sleeping attachment for vehicles. The contraption seems to be designed with the needs of long-haul truck drivers in mind. It therefore seems safe to conclude that Hairston had at least some measure of success as an inventor after the war ended. It is curious, and probably not coincidental, that he invented a sleeping attachment for trucks after being denied a job because white truck drivers didn't want to share a bunk with him. There is an untold story lurking there.