My entire family is from Bulgaria. Even me, though I was just two months old when my parents moved to the United States. We visit every year for just a couple of weeks, which is not really enough time for me to feel attached to Bulgaria as a place, but I’m keenly aware that it has affected the way I’ve grown up, the way I think, and generally who I am as a person. I’m attached to Bulgaria as an idea, I think.

This sort of strange relationship I have with my birth country is why I sought out archival documents from American archives about Bulgaria. I knew I wanted an American perspective on Bulgaria, because while I don’t have an entirely Bulgarian perspective, I definitely see it differently than Americans who don’t have the same relationship. In the end, I found an article from the New York Times archives from June 28th, 1992, called “Restoring Bulgaria.” The article is written by a volunteer for a land reclamation project in Bulgaria, done by Earthwatch. 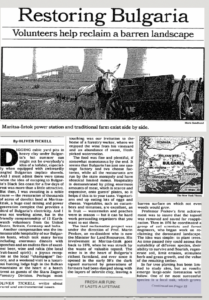 I expect the reason this article has been archived is just because the New York Times started digitizing all of their print issues, so this was included. Interestingly, it’s on a page surrounded by ads, so I’m not sure what to make of that, perhaps that it’s not really meant to be official news, which makes sense. 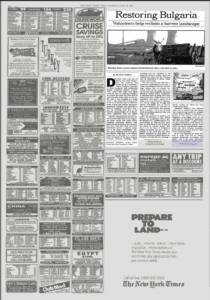 The project involved restoring acres of barren land with new soil, as well as some tree planting and river cleanup. The author uses a lot of description for the environment and for the way the volunteers interacted with the local Bulgarians, which is in part why I chose this document. I also thought the perspective of “restoring Bulgaria” was interesting, a little bit because I resent the view that it needs restoring (though I understand that’s not really what this person means). Because Bulgaria is very agricultural, not well-known, and one of the poorer countries in Europe, I think it’s seen a certain way that comes across a bit in this article, and my goal was to challenge that view through a personal reflection on Bulgaria.

In the end, I wrote two poems, the first was more of a personal story about me and my relationship with my birth country. The second was more about hitting the goal of making people see the good parts of Bulgaria, the parts that, for any country, are often overlooked when people have a preconceived idea of it.

You can note that in the first one, I took complete advantage of the fact that the article was in the first person and that I could use the word “I” while in the second one I decided to avoid it altogether. It wasn’t my original intention but when my first poem ended up seeming mostly about me, I challenged myself into making the second one more about Bulgaria, but specifically my most positive view on it.

My basic process was to just make a word bank, using parts of speech as categories, and then essentially just stare at it until a few lines came to me. After that, I sort of worked from there, but definitely a lot of staring at the available words and hoping a line would materialize in my head.

I must admit
Bulgaria, for me, is
Awkwardly and tentatively
Sitting and studying and surviving.
It’s hard,
It’s somewhat of a home, in a way.
But it’s also a place I visit,
Once in a year,
Only in the summer, in the heat.
I visit generations,
Stara,
Old.
I am not just once or twice removed from them.
I am a thousand years from them.
They who gave my parents all they needed.
They who support me from thousands of years away.
I must be a mess to them,
A figure of the United States,
Saturated in a different land,
Daft in my inability to do more than look.
I must admit,
Bulgaria is a place that escapes me.
I expect I am daft, in a way.
The speech, the land, the people, all of it.
My parents,
Who came from farmland,
And are now scientists.
Who faced the problems of leaving home,
And are now flourishing.
Who took a baby to a new land,
Who is now
20 and old and new.
Who is joyous and devastated,
Who is puzzled by all people,
From Bulgaria and from the United States,
Who is all over the place.
I must be a mess to them too.
But I must adapt to one place or another.
Not one is best,
Or worst.
I must admit,
Bulgaria is a place that I am determined to be part of.
A friend once asked me for Bulgarian.
But even simple speech is an immeasurable task.
I work and I cannot.
It left me when I was only a baby.
I have to reclaim it.
I must admit,
Bulgaria is a place that impresses me.
Unbelievably.
I am international.
There is legacy in me,
Through Bulgaria.
I must admit,
Bulgaria is a place I visit.
It’s not home.
But I must admit,
I’ve become from it.

In Bulgaria,
There are mountains.
Tall and rich.
Attractive, but not enormous.
Regular and immeasurable.
Plentiful with trees.

In Bulgaria,
There are coasts.
Sunny and dark.
The Black Sea flows.
Emerges and escapes.
Passing with time.

In Bulgaria,
There are cities.
Luxurious and filthy.
But never broken.
Shifting and surviving.
Becoming more.

In Bulgaria,
There are scientists and engineers and government.
Determined and impressive.
Tacking problems.
Successful and spearheading.
Sprouting with ideas.

In Bulgaria,
There are generations of people,
Old and new.
Friendly, though a little hard.
Simple and complex.
Flowing with spirit.
Surprisingly noble.
Miraculously joyous.
Especially valuable.

In Bulgaria,
There is what you expect,
And much more.

Remixing these poems was much harder than I imagined. Even though I had found a full-length article that, when I made my word bank, I was annoyed with the number of words, I still found my vocabulary stunted and limited. If I had more practice with it, I think I could probably create slightly better remixes, but I definitely found it difficult for now. There were many times when I wrote a word and then realized it might not be in the document, I checked, saw that it wasn’t, and had to rethink the entire line.

On the other hand, it’s interesting to be limited by word choice. Because my article was so heavily focused on nature, I had thought about writing poems with nature metaphors or word choice, but at the moment that seemed too obvious. Now I think it would have been the smarter move anyway.

I did take some liberties with the words, changing the tense or the part of speech, which I personally think should be allowed in remixing because the root word is there, as is whatever I changed about it, such as “ed” or “ing” or “ly.”

Another strange and unexpected effect of the remixing is that I spent so long on the poems, just thinking in sentences formed by words from the document, that when I tried to write something normal afterwards, I found myself subconsciously hesitating to use a lot of words. My brain had briefly rewired its vocabulary!

Overall, I thought remixing the document into poems was a really interesting way to create poetry and look at the text in a different way. I think it’s something I’d be willing to try again.