Everyone’s family history is made up of a mix of family decisions as well as economic incentives. For example, the people that one’s parents and grandparents decide to marry change the trajectory of the entire family. Economic changes also affect the trajectory greatly. From choosing one’s profession to choosing what country would be best plays a significant role in how their lives unfold. This blog post will shine a light on my ancestor’s decision to move to America and how that impacted my life. I focus on this event because my grandfather would tell us stories about where how his parents grew up in Canada and that was a large part of my childhood.

History of Industry in Rhode Island

Samuel Slater is often referred to as the father of the American Industrial Revolution. He took the textile technology from Britain and moved it to Rhode Island where he and Moses Brown built their first factory — and the first successful water-powered cotton-spinning machinery in America — called Slater Mills in 1793 (Britannica; Conrad). The rapid expansion of the mills (and others) was the starting point of the American Industrial Revolution. The Industrial Revolution was a time of tremendous growth, both in the economy and in the population. In 1870, the population of America was 40 million (Gauthier 1870). That number rose to 76 million in 1900 with 1/3 of that growth from immigration (Gauthier 1900).

James Conrad, a former president of Nichols College, wrote the piece “Drive That Branch”: Samuel Slater, the Power Loom, and the Writing of America’s Textile History to describe the rise of Samuel Slater and his contribution to the Industrial Revolution. Because he had tenure at Nichols College, he approached the writing of Drive That Branch with an academic perspective.

All Chapdelaine’s in North America today are believed to have been descendants of Andre Chapdelaine who, in 1686, enlisted in the Royal Marines and left France for new opportunities in New France. From there, he moved to St. Francois du Lac, a municipality in Québec.

Maria Chapdelaine caught “American fever” and aspired for opportunities in America. Father Auguste Chapdelaine responded to these aspirations by saying:

“The secret of the United States is its promise and opportunities. If things don’t go well today, tomorrow will be better since life evolves constantly, and opportunities are created as needed. In the States, there’s economic promise through the spirit of initiative and enterprise.” (Chapdelaine 57)

The tale of Maria Chapdelaine is a well-known one. In fact, there is a book about her that has been included in school curricula in Canada as well as an upcoming movie about her life (being released in August of 2021).

In 1909, they listened to Maria and moved to the United States. The Chapdelaine family left the farm in St. Francois du Lac and moved to Olneyville, a neighborhood in Providence, Rhode Island. There, they found work at the previously mentioned textile mills. In fact, the textile mills primarily hired French-Canadian workers.

In my two poems, I wanted to display the idea that every individual comes from a long line of ancestors and how one change can dramatically impact the lives of your family. There were countless actions that were taken by previous Chapdelaines that led to the family moving to the United States and choosing work here. Two primary sources that I remixed my poems off of, Drive that Branch and Chapdelaine Family History and Lore, both highlight different aspects of the motives. In the former, James Condrad, Jr. explains the booming industry in the time of the Industrial Revolution, highlighting the role of Samuel Slater and his mills. In the latter, Henri J. Chapdelaine explains how the Industrial Revolution impacted the Chapdelaine family. It’s both of the documents together that begin to illustrate the full picture. There was a mix of both family decisions (such as getting married and having kids) and economic decisions (such as moving for better opportunities and Slater erecting mills in Providence) that lead to the life that my family and I lead today.

For the first poem, I wanted to show the hierarchy of events, people, and concepts that lead to my life. To do so, I used the OCR software Tesseract to get all of the words present in both texts. Then, I cleaned up the documents by removing irrelevant words that are just used for sentence comprehension (such as stop words and words that didn’t hold meaning by themselves such as “since”, “then”, etc.), fixed errors of the OCR software (such as the common misinterpretation of Chapdelaine as “Chap de laine”), and hyphenated names (so that they would be interpreted as one word). Once cleaned, I then gathered the most common words in both Drive that Branch (shown in blue) and Chapdelaine History and Lore (shown in red) and compiled them into a hierarchy as shown in the first poem below.

I took inspiration from Phillp’s Zong! by having each word floating in space. Family trees have near-infinite complexity so I wanted to capture that chaos like Phillip does in Zong! by not having complete sentences. It is the combination of many different ideas — marriage, industry, etc. — that resulted in my family.

The second poem, tells the story more coherently. Each line is a direct quote from either Drive that Branch or Chapdelaine Family History and Lore. My family’s motives for the move to the United States is explained both by snippets of texts explaining the Industrial Revolution as well as the snippets of text describing my family.

Although I did not grow up in Rhode Island, my dad did. We also visit frequently as my grandparents live there. My grandparents live so close to Olneyville that my grandfather used to always say, “I can stretch from here to Olneyville, but I would have to walk back”. It was interesting to discover just how important Olneyville was in my family history. It was my first family’s introduction to the United States and still holds importance with my family today. 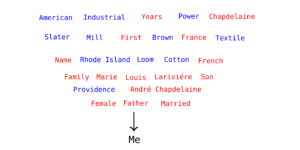 cotton textile industry through their machinery,

Olneyville on the outskirts of Providence,

married in Quebec then came to the States seeking fortune.