This archive is designed to explore how the history of mathematics has been impacted by women.  From the time of the Greeks to almost modern day, STEM fields have been dominated by men. Only recently has this trend shifted.  This is especially true for those in mathematics. Female applied mathematicians, such as those in computers science, have been popularized through pop culture references, such as the movie Hidden Figures.  However, 19th and 20th century theoretical mathematicians have remained relatively anonymous. I propose that this is the case for two reasons. First, with the rise in number of mathematicians, it is easy to forget those who came before.  Second, and probably more importantly, pure mathematics is nowhere near as accessible to the public. This archive attempts to remedy both of these problems.

This archive assumes no prior knowledge about the history of mathematics.  First, it explains the impacts made by female mathematicians before the 18th century. Then, it explores one of the causes of the rapid growth of the number of known female mathematicians.  This is followed by a timeline of publications from 18th and 19th century and concludes with biographies of a few lesser known women who were involved in mathematics. In order to select the appropriate items for this archive, I limited myself to materials that were not well known.  This archive could have been several pages longer if it was filled with information about women in mathematics today, but that is not the purpose of this exploration.

Treatise on conic sections
Kōnika English
Apollonius, of Perga
Treatise on conic sections
Kōnika English
Master microform held by: UnM.
"List of principal authorities": p. [xiii]
Introduction: pt. I. The earlier history of conic sections among the Greeks. 1. The discovery of conic sections; Menaechmus. 2. Aristaeus and Euclid. 3. Archimedes. pt. II. Introduction to the conics of Apollonius. 1. The author and his own account of the conics. 2. General characteristics. 3. The methods of Apollonius. 4. The construction of a conic by means of tangents. 5. The three-line and four-line locus. 6. The construction of a conic through five points. Appendix: Notes on the terminology of Greek geometry.--The conics of Apollonius.
Apollonius, of Perga

Brief History of Women in Mathematics

There is a debate as to whether mathematics was discovered or invented.  For instance, consider Pythagoras, a Greek philosopher that is credited for the Pythagorean theorem and Pythagorean triples.  However, these things were known by the Babylonians centuries before. It very well could be that Pythagoras was the first to construct a formal proof but is that truly discovery, or just invention?  Far lesser known was the wife of Pythagoras, Theano, who may have also been a mathematician. Some sources credit her as helping invent the principle of the Golden Ratio, while others say she accomplished nothing.  In an article researching her life, Michael A.B. Deakin writes that the work with the Golden ratio “was the sort of thing she might have done, but there is absolutely no evidence whatsoever that she actually did.”[1]  This idea holds true with many women who may have explored a topic in math before the 20th century. Be that as it may, there are a few records that date back to earlier times.  Hypatia, a Roman philosopher and mathematician who died in 415 AD, is widely cited to be the first known female mathematician. One of her more important contributions was simplifying many calculations that were found in On the Conics of Apollonius,  which explored conic sections, such as cones and parabolas.[2]  After Hypatia, things go silent and there is not a reported female mathematician for another 1200 years.

However, starting in the 18th century, there is a rapid growth in the amount of information available about not just women in mathematics, but about everyone in mathematics.  This is also the turning point regarding silences in archival data. Before the 1700s, there was no recorded information that could be archived, which is impossible to remedy today.  But now, at least some information is recorded.

Relatively speaking, the most famous mathematical journal for women was The Ladies’ Diary: or, the Womens Almanack, which was published yearly from 1704 to 1841 and was based in London.  It was marketed as an almanac, but the majority of the space in the journal was filled with reader submissions.  Jacqueline Wernimont, the author of “Women, Mathematics, and the Periodical Tradition in Britain: or a History of Women Rocking Math from the Beginning”, states that “The Ladies’ Diary reminds us that women’s periodicals were central to advancing the major modes of knowledge production, pleasure, and civic engagement to which early modern audiences were increasingly attuned.”[3]  Even though this literature was not as widely known, literature like this were the key to making mathematics more accessible to all audiences, not just men.

On the right is a page from 1826 edition of The Ladies’ Diary.  On close inspection, one might notice that this solution was written by a Mr. John Walker.  While the editor, John Tipper, wished for this journal to contain submissions from female writer.  However, it is not surprising that, for the time period, this hope could not be realized. That being said, it is estimated that more than twenty-five percent of the submissions were from women which indicates that The Ladies’ Diary was one of the first mathematics focused journals that had not just some female readers, but a high percentage of them.

In the next two centuries, regardless of whether women were motivated by this journal or by another source, the number of female mathematicians drastically increased.  Below, I attempt to explore some of their explorations into mathematics. 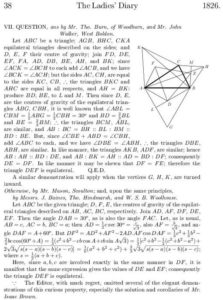 Above is a timeline of publications as well as dissertations authored by female mathematicians during the 19th and early 20th century.  While this is not an exhaustive list, it provides a rough sketch of the rapid growth in the number of papers.  Looking below, one might notice the comparatively few biographies relative to the number of publications on this timeline.   Items published in mathematical journals and other pieces of literature are often stored indefinitely.  Universities save dissertations as it is a reflection on the university and organizations like the MAA work to archive all publications.  However, biographical information and pictures are not guaranteed this privilege. This was partially due to the belief that some details were not important enough to be saved.  This poses an issue for this archive.  Below is an unfortunately small list of biographies.

Maria Gaetana Agnesi was a woman of many firsts.  She was born in 1718 and was the eldest of twenty-one children.  By the time she was a teenager, she was already fluent in several languages and was working on her most famous work, Analytical Institutions.  In it, she gives one of the most detailed description and interpretation about mathematical analysis, from function behavior to integral calculus.  These interpretations were widely used and her book was translated into several languages. Because of her contributions to the field, she was appointed as the first female chair of the mathematics department of the Bologna Academy of Sciences.  However, she only devoted the first part of her life to the study of mathematics. Around 1760, Maria discontinued her studies and turned to charity work. For the rest of her life, she devoted herself to working with the poor and homeless. In 1799, she died poor and was buried in a mass grave.[4]

Dr. Anna J. Cooper was born in North Carolina in 1858 as the daughter of an enslaved woman.  When she was nine, she received a scholarship to Saint Augustine’s Normal School and Collegiate Institute, where she spent fourteen years.  At the time, the school had a separate course track for men and women. By demonstrating significant academic ability, she was allowed to take the “Gentlemen’s Course”, as it was known as at the time.  When she graduated, she became a teacher there for a few years. In 1887, she obtained her master’s degree in mathematics from Oberlin College. Afterwards, she taught at a high school in Washington D.C.  While Dr. Cooper never formally published anything that was rooted in mathematics, she was a strong advocate for math and science education among the African-American community, especially among women. While she was teaching, she published the book entitled A Voice from the South, which was one of the first that described and articulated Black Feminism.  In 1925, she earned her doctorate, which was entitled “The Attitude of France on the Question of Slavery Between 1789 and 1848” from the  University of Paris. She was still teaching at the time and was 67 years old when she was award her degree.[5]

Dr. Christine Ladd-Franklin was born in 1847 in Windsor, Connecticut.  Her mother died when she was only 13, which forced her to go live with her grandmother in central New Hampshire, where she received some schooling.  Then, she enrolled in a program at Welshing Academy, in Massachusetts, where she graduated as valedictorian. Even though she had moved several times, she wished to continue her education so she attended Vassar College in 1866.  However, she was forced to drop out after only one year due to financial concerns. After raising enough money from teaching, she was able to return to Vassar and graduate a few years later. For the following few years, Dr. Franklin published articles in several mathematics journals.  In 1878, she applied to John Hopkins University in order to start mathematics graduate work. She was accepted but the acceptance was almost rescinded when the board of trustees discovered she was a woman. However, her acceptance was supported by one of her advisors, which allowed for her to continue her studies.  She completed her dissertation on symbolic logic but was not able to received her degree as John Hopkins because, at the time the university only granted PhDs to men. Even though she encountered a minor setback, Dr. Franklin was a prolific writer and began research on the optics of color vision, which led to one of the first accurate descriptions of color vision.  In addition, she became the first woman to be inducted into the American Psychological Association in 1893. Several decades later, she was finally awarded her degree by the John Hopkins in 1926, after waiting almost forty-four years.[6]

Dr. Marguerite Lehr was born in Baltimore, Maryland in 1898.  She was raised in a low income family and was a first generation college student.  In 1919, she graduated with an undergraduate degree in mathematics from Goucher College.  Afterwards, she became a graduated student at Bryn Mawr College and was famed mathematician Charlotte A. Scott’s final PhD student.  Dr. Lehr received her degree in 1925. Shortly afterwards, her dissertation was published in the American Journal of Mathematics. For the rest of her professional life, she was a professor at Bryn Mawr.  While she was teaching, Dr. Lehr was fascinated with different mediums that could be used for mathematics education.  In 1953, she began recording a series of classes that were aired on a Philadelphia tv channel. This classes were designed to introduce her audience to fields in mathematics and not overwhelm the audience with advanced topics.  Because of her familiarity with this form of education, she was consulted on several tv series and became a member of the MAA Committee on Film Project. By the time she retired in 1967, she was a member of numerous international mathematics societies and was honored by Goucher College for her work.  [7]

[3] Wernimont, J. (2016, December). Women, Mathematics, and the Periodical Tradition in Britain: Or a History of Women Rocking Math from the Beginning. In Women Writers in Context. Retrieved from           https://wwp.northeastern.edu/context/index.html#wernimont.mathematics.xml