Unfortunately, there has been a gap left in the records, a lack of multiracial historical representation due to neglectful data collection. The purpose of building this archive is to demonstrate the way multiracial people in America have been recorded (or more often ignored) throughout history. The About Page provides more background information to this archive and the motivation behind this investigation.

Checking the “Other” Box

Usually, when filling out the racial demographic section on any kind of survey or official document, there is an option to check as many boxes as you identify yourself as. Every time, without a second thought, I check the “Asian” and “White” box, and sometimes even the “Pacific Islander” box if that is available. From doctor’s offices to standardized testing, I’ve always had the option to indicate more than one race as my own. That is, except for one time. 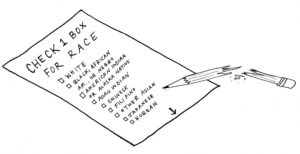 I was 15 years old and just getting my drivers permit, when the woman behind the desk at the DMV asked me what race I’d like to indicate on my ID. When I replied with my two different racial identities, she told me, with an uncomfortable expression, that I could only choose one. I froze, not knowing what to do. I didn’t feel right claiming to be solely either “White” or “Asian”. Obviously seeing the panic in my eyes, she told me I could choose “Other”. Maybe she thought having this option would reassure me, but I ended up leaving the DMV distraught that I had been labeled as “Other” on my ID.

This experience, no matter how small it may seem, has stuck with me. Because of the time period I have been privileged enough to grow up in, being biracial is no longer uncommon, and it is widely recognized that millions of people don’t fit into a single box on these kinds of surveys. I was so used to being able to express my full identity that this sudden limitation caught me off guard.

Changing the US Census

It wasn’t until 2000 when there was finally an option on the US Census for people to indicate themselves as more than one race. Before then, while the categories to choose from encompassed a diverse range of ethnic backgrounds, these confining boxes did not fit everyone perfectly.

The way the US census has recorded data on race over it’s span of existence has evolved from year to year in an ever-growing attempt to better measure the demographics of such a racially diverse country. And with a country where race has played a central role in status both throughout history and even today, the census questionnaire reflects the way the politics of race has changed over the decades. “What Census Calls Us: A Historical Timeline” is a fantastic interactive resource that shows the comparison between the census today and versions used in the past. With a side-by-side visual layout, viewers are able to see the stark contrast in not only how America’s population became more diverse over time, but also how the government came to categorize different groups of people. 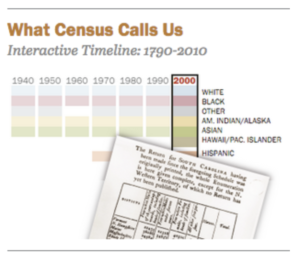 Early Versions of the Census

The first ever US Census in 1790 only had 3 racial categories: free white, all other free persons and slaves. In the era of slavery, race represented not only a physical characteristic, but also the brutal and inescapable hierarchy run by the free white man. The question of race was automatically associated with the question of one’s liberty.

It wasn’t until 1850 when the option of “mulatto” was available, a very general term to describe anyone of mixed white and black parentage. This accounted for anyone with any trace of African blood – as well known by the “One Drop Rule”. In 1890, even more specific terms for mixed-race people were listed: quadroon – for those who had ¼ “black blood” – and octoroon – for those with 1/8 or less. The images below show a few examples of mixed race individuals who would fall under these categories.

However this didn’t last long because in 1900, the census was changed back to only having one category “Black (Negro or of Negro descent)" that consisted of anyone to have African ancestry. Census officials deemed the data from multiracial categories “of little value and misleading”, so they neglected to continue recording it.

It is very true that the information about multiracial people might have been imperfect. Throughout this entire time, from 1790 to 1960, the census was not a self-reporting system.

Instead, it was the census takers who came to your door to collect data, and it was the census takers who determined the race of the people they counted. In early censuses, federal marshals conducted these surveys. This changed in 1880 when government appointed enumerators who lived in the district they counted in were hired. This was done in an attempt for more accurate results, particularly on race, so that enumerators would be able to personally know each household, and therefore have a preconceived idea of race of each family.

Each census taker was different. Some counted mixed-race people according to their father's race, other's categorized them immediately with their minority group. With over 100 years of inconsistencies in census takers' definition of race and their mistakes made due to false perceptions, the records are left devoid of accurate information about people of multiracial backgrounds.

The images on the right are examples that show perspectives towards the census over the years.

The two letters are concerning mixed race African Americans during the early 20th century, and draw attention to the "One Drop Rule". The newspaper article includes a headline addressing the momentous change to the census where the multiracial option was finally allowed. Letter from Robert E. Park to Diedrich Westermann
Park, Robert Ezra, 1864-1944
Westermann, Diedrich, 1875-1956
Letter from Robert E. Park to Diedrich Westermann
Sends information on the Encyclopedia of the Negro and will send an article on the cultural persistence of Africanisms in Bahia for the journal Africa. Wishes Westermann's opinions on persons of mixed race in Brazil versus the United States: "I find it rather difficult, in short, to reconcile the anthropological conception of the Negro with the conception that prevails in the United States where, as you know, one drop of African blood makes a white man a Negro or, to use the census definition, 'a Negro is one who is known as such in the community in which he lives.'"
Park, Robert Ezra, 1864-1944
Westermann, Diedrich, 1875-1956 Undoubtedly, this is no coincidence. It is likely that these populations had always been significant, but were only then getting the opportunity to self-report their identity and be recorded by the government accurately.

Not to entirely discount the rise of multiracial populations. In 1990, "Other" was the third fastest growing group in America. More recently, in 2013, 9.3 million identified themselves as being multiracial, about 3% of the country's total population.

The changing of the US Census options also represents a societal shift, as the traditional norms are challenged. At first, the census only looked at free white people and enslaved black people. But as American demographics have changed, the census has adopted the new labels to fit, as well as reflecting social public opinions. The ban on interracial marriage, carried out by anti-miscegenation laws, was lifted in 1967. Public approval of interracial marriages skyrocketed from 5% in the 1950's to 80% in the 2000s, likely contributing to the census alteration that allowed more than one race to be chosen. (The images in the gallery below depict a few examples of interracial couples even before this societal outlook was changed.)

Today, race is no longer just a fixed physical characteristic, but a more fluid concept of identity and culture that social scientists today believe is influenced by the current social and political thinking. The census had the power to define race into tight little boxes, and limit society's perception of what these identities meant. The materials in the gallery on the left are a few examples of multiracial people getting to express their experiences and share their narratives. By opening up these boxes, the census now has less control over limiting racial identity, and mixed-race people can feel less constricted in their own identities. I am glad to have grown up in a time where I get to check all the boxes that define my identity, at the same time knowing that I don't need to let these labels define who I am.