“Nothing more influential than rap music,

I merge jazz fusion with the trap music,

I mix black soul with some rock and roll,

It’s violent. It’s explicit. And yet, we love it.

With the flow and rhymes, the beat and sway, the style and swagger, it’s the music of hip-hop that captured the world. It’s a lucrative economy and a firm culture, accounting for over 1/5 of music consumption in America.2 And yet, its popularity draws in equal amounts of criticism.

Geraldo Rivera, a FOX News commentator attacked lyrics from Kendrick Lamar’s March 2015 single, Alright: “This is why I say that hip hop has done more damage to young African Americans than racism in recent years.”3 The criticism against the rap industry questions the content it produces: Do these rappers not perpetuate misogyny through explicit references to women as “ho*s” and “b*tches”? How can music about “choppers” ripping through the streets not propel more violence to its consumers?4

Would the Real Rap Music Please Stand Up?

These questions are not only about what the rappers promote through their music, but also about what type of characters, narratives, and ideas the rap genre introduces. They are questions about hip-hop. Taking in all forms of blues, jazz, and street culture, the hip-hop industry was never a refined item for high society. It was rather assumptive music, primarily due to its early audience: urban, black men.5 They claimed it as a violent medium that will poison the youth.

How do we reconcile its beauty, yet criticism? The answer is that to examine rap music is not to debate, but to research: what is rap music truly about? We are taking the criticism that rap music has the power to perpetuate violence, misogyny, and racism against the content of the lyrics. This blog examines the content of my favorite rappers and commercial rap music to better understand what rappers communicate through the medium. And perhaps more importantly, how the rappers communicate through the medium. How does power from rap music create its own field of exercise through the rapper’s experience?

Straight out of API

The rap lyrics were obtained from the Genius API, requiring a user Client ID for permission. To be honest, it was not as user-friendly as I initially hoped, and the lyrics required some background knowledge of python to gather text for the corpus. You needed to download the Genius API Module and work with the codes from there. Below demonstrates an example of part of the script to pull off rap lyrics from the artist. 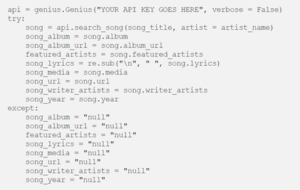 The way I was able to collect the lyrics was through the artist, rather than date, allowing us more flexibility when it comes to examining the music we’re working with. In short, we were able to gather lyrical text documents based on the artist’s work. Some individuals include icons as Eminem, Biggie, Jay-Z, and such.

The first step of the research is actually a close examination of two artists: Kendrick Lamar and J. Cole. By examining the two rappers known for their lyricism and conscious rapping, I wanted to understand the landscape we’re seeing. The pictures below are from WordCounter, which is a web-based text analysis that counts the words used the most often. This is Kendrick Lamar:

And this is J.Cole:

According to the Web-based counter, we can see that explicit terms are used heavily for both internationally recognized rappers. But it’s rather rash to jump to a conclusion and state how this summarizes the state of the rap industry. What’s rather interesting is the word they’ve used the most: “I’m.” This caught my eye. In what ways do these rappers communicate through “I’m” and more importantly, why does it matter? The idea is rather fundamental: if we communicate through the first pronoun, then it’s personal. A further examination into their bigram, which examines the most common two-word phrase, reveals a clearer picture: 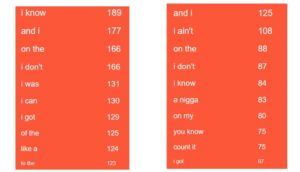 Most of the bigram terms the rappers use are in relation to themselves: I don’t, I was, I ain’t, I know, I got. I would argue that this is critical to understanding rap music, especially because of the weight the use of pronouns carries. There’s a reason we were told to write our papers without “I” or “Me”- it leaves out the sense of being objective. “This blog illustrates” over “I will illustrate”. This is because the pronoun often transfers those statements of what’s objective into something more personal. I believe these findings are interesting because the way Kendrick Lamar and J.Cole express their ideas does not just mean that these statements are not just made by rappers, but they are also made through them.

So, can we draw this idea out further to the commercial rap industry?

With over 41 artists who accomplished major record labels, the corpus is built with over 4 million words (4,747,987 words to be more precise). The first query was the clustering tool in RStudio. With the function that gathers 10 words strongly associated with one another, what can we from 13 random clusters? 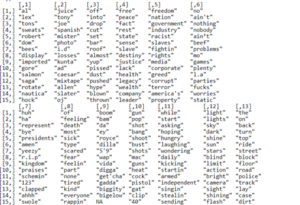 The clustering function is an attempt to find interesting relations between the words rappers use in their work. Some make intuitive sense, such as cluster [12]. Everything associated with “Light” associates with one another. Perhaps, they’re describing their own journey as a light or a hidden star. Some clusters provide more interesting associations. Take cluster [4], there are concepts of freedom associated with wealth, destiny, justice, slavery- topics that are beyond the idea of going to strip clubs and burning paper money. Its neighbor, cluster [5] is just as interesting: political tension and commentary about the dynamics of power, political authority, and the media.

The cluster isn’t just a demonstration of how “light” is associated with “sight” or “camera”. It’s also showing us the ideas that rappers associated the ideas of “slavery” and “peace”, “government” and “corruption”, “racism” and “fighting” awfully close together. This suggestion of rap music seems to require a stronger perception of what the rappers can actually communicate. So, how does this relate to our first examination of Kendrick and J.Cole? Based on the way the two rappers rap, with the use of personal pronouns, the way these rappers communicate these ideas aren’t just poignantly perceptive, but also personal. But how this idea further expands the criticism and debate behind the commercial rap industry?

Well, this is my next question: when we examine terms, such as money, power, and sex, can we understand the particular way rappers communicate these ideas?

The next step of the research is querying, where we investigate individual words and find the words closest to the particular word in vector space. These are the results based on typing rich, powerful, and sex respectively: 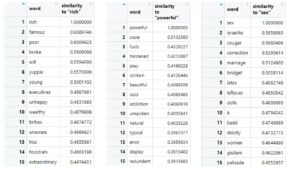 What I found interesting was the way they refer to these terms in contrast in terms of money and power, yet similarity in sex. For when rappers refer to being rich, they also mention “poor”, “broke”, and “unhappy”. And yet for sex, they often refer to “cougar”, “dolls”, and “women”. The implication of this query relates to the idea of misogyny and the rap industry. After all, the terms referred to women are used liberally for all rappers- both east and west coast alike. But I think there is one additional idea we can see through the word “rich”. We can see that the rappers try to present a bigger picture: rich, poor, hoodrats, extraordinary. The terms associated with “rich” also imply the stories of struggle, success, and even the downside of being rich with the word “unhappy”. The trauma of the streets, trials of poverty and racism, the power exertion of gender, are all tensions we understand when it comes to rap music. It’s what makes it brutal, yet reflective of American culture- at least, one part of it. But this examination asks the question we have from the start: how do we confront this tension? What can this research and textual query have a say about it?

Rap music, like all other music, has a story. It’s a history of inheriting the narratives of black culture and African American struggle that makes the industry critical, yet honest.6 It’s music that was meant to communicate across all different ideas7: race, wealth, gender, religion, and so much more. And perhaps, more notably, it’s music that invites individuals to communicate their ideas, lives, and beliefs into this medium. In short: rap music, at its core, is experiential. This idea points to both the beauty and criticism it invites.

When experience is embedded in art, it turns real. It asks for engagement with who we are as individuals and as a society, with ideas and values that govern our everyday life. It introduces voices we weren’t able to hear or consider from before. They prompt us to articulate and think of the everyday life we live and how we experience it, not only as individuals but as communities and as a society. The research in this blog only scratches the surface of what rap music is and has to offer. There are glaring limitations to the project and the data I’ve collected. If I were to continue my research, more specificity in terms of what kind of rappers would be the next step of this project. What about women rappers? Why didn’t I differentiate between geographies or style or time?

My biggest hope in this research was to dig deeper into the dialogue of rap music and what it means for me, as well other fans and consumers. It was not meant to take a side of an argument, but to further expand on the implications of each side. This is an invitation to both the readers and me to subject our view of rappers and the rap industry for critical examination- to understand how to listen to rap music, and why.