Why are Books Banned?

Background of the Corpus

My corpus consists of 11 books that have either been banned in the United States or that people have attempted to ban but failed. They are Alice in Wonderland, I Know Why the Caged Bird Sings, Lolita, The Adventures of Huckleberry Finn, The Adventures of Tom Sawyer, The Call of the Wild, The Great Gatsby, The Jungle, The Scarlett Letter, Ulysses and Uncle Tom’s Cabin. While book banning seems like an outdated practice, it still happens more frequently than one would expect in today’s society. However, from personal experience, I know first-hand that there are still groups of people who are uncomfortable with themes in certain literature, despite the educational benefit it has on students. When I was a senior in high school, my school district actively tried to ban several books because the board and old white men who were “concerned” that we would be negatively influenced and traumatized by the literature were made uncomfortable by certain scenes. Because of my own frustration with the concept of banning books, I decided to pose the research question “what common themes can be found in banned books, and why might they be considered inappropriate”? In the article “Banning Books” by Bryan Harris, he suggests there are 4 main reasons that books are banned “politics, religion, obscenity and general non-conformity”.  This list is very broad, so in my research, I hope to pinpoint more specific reasons or themes that cause books to get banned.   To answer this question, I found the texts of different banned books on Project Gutenberg and analyzed them with word2vec.

The first step I took on word2vec was using the clusters. By creating clusters, I hoped to find words that were provocative, offensive or alarming. There were several clusters that seemed to fit these categories. The first cluster I believe came from The Adventures of Huckleberry Finn and The Adventures of Tom Sawyer based on the offensive word choice and the southern slang. I chose to censor the racial slurs when including the image.  Huckleberry Finn is known for being controversial with its use of the N-word because of the word’s racist history. Literature that uses this word is often censored, especially when the targeted audience is younger.  Although Tom Sawyer does not explicitly say the N-word, it does have anti-black sentiment. In addition to this cluster containing the N-word, it also contains uneloquent slang. Concerned parents and teachers could view this slang as harmful because it doesn’t teach students proper English. Most people view this language as uneducated. Reading these books as a piece of academic literature could also promote the use of nonstandardized English, which is frowned upon by educators.

Another cluster contained words that seemed like they could be interpreted as overly violent and “unsuitable for certain age groups”.  Certain scenes in The Call of the Wild, I Know Why the Caged Bird Sings, Lolita and Uncle Tom’s Cabin are graphic and or violent. Words like “staggered”, “blind” (when used as a verb rather than an adjective that describes someone’s physical state) “sprang” and “fought” all insinuate the use of violence.  And although most of these books are taught to high schoolers, The Call of the Wild is at an elementary reading level and taught to a very young audience. Parents might find certain scenes such as the dogfighting scenes too frightening and graphic for their children. One scene from Lolita that may still be “too violent” despite being taught in high school could be the final scene where Humbert shoots Quilty. Words like “staggered” and “struggling” are likely to be used in this scene.

One of the clusters I found listed words related to The Jungle, specifically relating to the process of creating the meat. Words like “killing”, “gang”, “fertilizer” and “rooms” give off negative connotations. Prior to the publication, people were unaware of what sort of process was used to create packaged meat. Killing and gang are violent words that make it seem inhuman towards the animals. Fertilizer is an especially alarming word to find when discussing the production of meat because it could imply that it is used when packaging meat. Although these were not the reasons for the ban, these types of words and connotations are what made this book alarming to readers.

The first name I searched was “Lolita”. The words closest to Lolita were concerning.  Lolita is told from the perspective of Humbert, Lolita’s stepfather. However, Humbert is also in love with Lolita and he tries to form a sexual relationship with her. Referring to Lolita as “darling”, “pubescent” and “child” is disturbing. Because of the incestual relationship and attempted child grooming, Lolita is banned from many schools. Annabel was Humbert’s first love when they were both 14, although Annabel dies at a young age. Humbert explains that he is in love with Lolita because she has the same childlike behavior as his first love Annabel, despite him now being a full-grown adult.

Another name that I searched was Prynne from The Scarlet Letter.  I was surprised by the results. Only one of the words associated with Prynne actually addresses her “sin”, adultery and having an illegitimate child.  But even “mistress” doesn’t directly refer to her having an illegitimate child. What is interesting about this book, and proven by the queries, is that Prynne’s adultery is never explicitly stated. I later tried searched closest to “adultery” and “adulterer”, and there were no similar words. I went to the actual txt file for The Scarlet Letter and keyword searched “adultery” and nothing showed up. Therefore, I would have to assume that the reason this book was banned wasn’t because of the direct discussion of adultery, but instead the implied themes.

When evaluating why Uncle Tom’s Cabin was banned, it is important to look at the historical context of when it was written. One reason was that it opposed slavery. I searched “Tom”+ “Slave”. When searching “Tom”+ “slave”, negative words showed up like “forcing”, “wretch” and ‘abuse”. This was a social statement against slaveholders because it showed the negative conditions that they were in hence the south wanted it banned. Currently, the reason for its ban could be its violent scenes.

One scene from I Know why the Cage Bird Sings that is extremely triggering is when Maya’s mother’s boyfriend rapes and assaults her. In order to look at the language surround this scene, I searched “Maya”+”Freeman” but nothing useful showed up. I subsequently searched “Freeman”+”touch” and sexual words showed up. This scene could be triggering and upsetting to younger audiences or those who have experienced assault in their life, hence its ban. 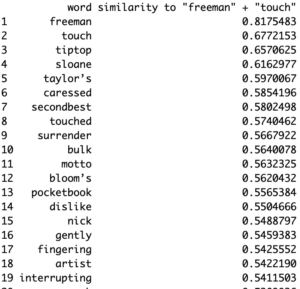 Sometimes, searching the names of main characters was not helpful since the reason for the ban wasn’t necessarily related to a specific character. As a result, I had to search other queries with keywords that could give insight into the language used when describing potentially problematic scenes.  In The Call of the Wild, one issue was violence that was unsuitable for the age group. One example that came to mind was the dogfighting scenes. I searched “dog”+”fight” and words like thrashing, fighter and axe showed up. These words have the attitude of violence. Young readers might not be able to handle this violence, and words like “heartbreaking” can invoke sadness and potentially trauma from these scenes.

At first glance, Alice in Wonderland doesn’t seem to have any problematic themes. But, when overanalyzing certain scenes, such as those with the caterpillar or scenes where Alice is drinking the potions, people can make assumptions about the implication of drug use. This was a difficult query because there doesn’t seem to be any explicit reference to drugs. The only instance is when the caterpillar smokes hookah. As a result, I searched words similar to hookah. I was surprised to see that the caterpillar was not on the list, but it was still interesting to see the words associated with it. “Teapot”, and “doorknob” are often used in scenes with Alice, so adults may think smoking in front of children is inappropriate and therefore they could oppose the teaching of this book. 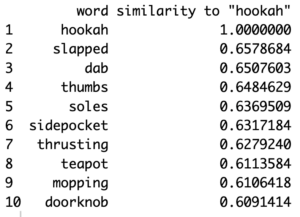 One troubling theme that was seen in multiple books is rape. As a result, I did a query for words similar to rape.  Alcohol was the closest word to rape. This implies that the rapes that occurred in these books were somehow related to the use of alcohol. Parents could be concerned that certain pieces of literature explain that rape happened because of the influence of alcohol. Additionally, the word “groups” is concerning because it implies that rape could have happened by a group of people, or that groups of people are okay with it happening. 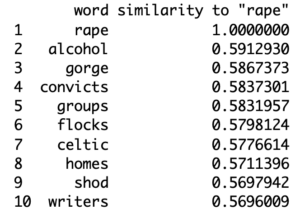 Another theme that is seen in some of the novels (specifically The Great Gatsby and The Scarlet Letter) is infidelity. Parents might not want their children to discuss such matters. I tried to query certain characters like “Myrtle”+”Tom+ and “Daisy”+”Gatsby”. Unfortunately, the resulting words were completely unrelated to their romantic relationships. I also tried looking up “Daisy”+”Myrtle” or “Daisy”+”Car” to try to find words related to the incident when she drunkenly kills Myrtle. However, nothing relevant showed up.

Finally, I ran queries to try and get at why The Jungle was banned. I stated earlier that there were gross descriptions of how meat was packed, but those descriptions were not enough to get the book banned. After doing research online, I discovered that this book was banned for “communist sympathies”. As a result, I search “share”+”workers” to see what sorts of words showed up. Words like “pittance”, “ownership”, “fund” and “contribute” could imply that the working class is not treated fairly. However, I think it is a bit extreme to jump to the conclusion that Sinclair was a communist sympathizer. Harris says that many authors are banned for political reasons. While the book itself may not seem offensive, the assumed political motives of Sinclair could be enough to get the book banned. 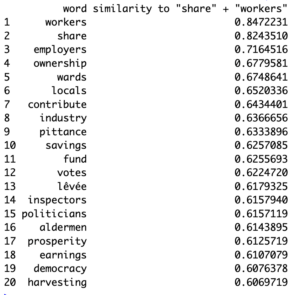 There were several difficulties I encountered when running these queries. For instance, the name Tom was used in multiple books. Searching “Tom’ was not helpful because there are Toms in The Great Gatsby, The Adventures of Tom Sawyer, The Adventures of Huckleberry Finn, and Uncle Tom’s Cabin. As a result, I had to search Tom with other words in order to narrow the search.  Another difficulty was finding concrete reasons for the ban of The Scarlet Letter since the word adultery never appears in it. Alice in Wonderland was banned for what seemed like ridiculous reasons, and my research demonstrated that the only reason it was indeed banned was over-analysis and false assumptions.

Although I enjoyed conducting this research, I found the results to be extremely frustrating. There was really nothing similar among all of the books.  Violence and infidelity were seen in multiple books, as was offensive language. However, there wasn’t anything consistent between all of them.  What was also difficult is some of the books were banned for their implications. The article “Banned Books, a Study of Censorship” by Jennifer Russock suggests that many people who try to ban books don’t even read the literature. This statement seems true because several of the books in my corpus don’t have any explicit reference to inappropriate acts or beliefs. She also states that most censorship is a form of denial. This can be seen when reading Uncle Tom’s Cabin because slaveholders were denying the fact that slavery is immoral. In all, I think it is crucial that we don’t ban literature because even though certain scenes and themes can be problematic, uncomfortable or triggering, they are still important for understanding the world around us and to hear the messages that authors hope to convey.