Disney animated films are filled with action and adventure. In which they aim to teach children moral lessons through a heavily visual medium. Although the visual cues that are made throughout these stories play an important role in our understanding of these films. I want to look at what messages are being sent through the use of dialogue. Specifically I want to look at how themes of gender are depicted through dialogue.

For this project I looked at fifteen Disney movie scripts. I picked a mix of films that centered around a female or male protagonist. Disney animated films showcase characters to children that are meant to be role models. They also tend to make a clear distinction between things that are deemed as masculine and feminine. I want to see what characteristics are most often assigned to each gender. All this being said my research question is To what extent does the use of language influence the portrayal of what is deemed feminine and masculine amongst male and female characters?

While looking at the data it was interesting to see what words ended up being clustered together. Unlike other mediums, scripts have a tendency to be super focused, so there are many clusters in which you can tell it honed in on a particular movie. This was interesting because you could quickly tell the themes that each of these films focused on, simply due to the words that appeared the most. Although most of the clustered gravitated towards a certain film there were some exceptions. For example there was a cluster that focused on character traits that were frequently assigned to people. There was also another cluster that looked at words that had to do with time. 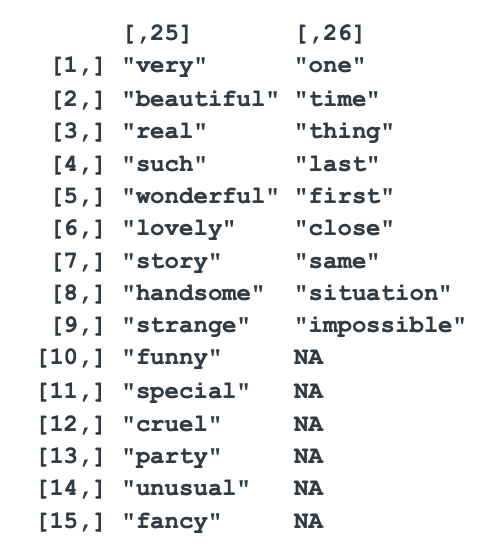 When looking at the quarries however, there’s a stark difference in the ways words are grouped together especially when it comes to gender. I specifically looked at words that are traditionally associated with males and females. In turn I got groupings that gave a lot of insight into how the dialogue frames the characters and gender norms within these films.

When looking at the words handsome and beautiful there is also a similar trend. The words that appeared the most alongside the word beautiful were character traits and objects such as jewelry. While the words that appeared the most alongside handsome were character traits and physical traits such as height. I also believe this is due to the fact that these stories are being told from the perspective of the princesses. 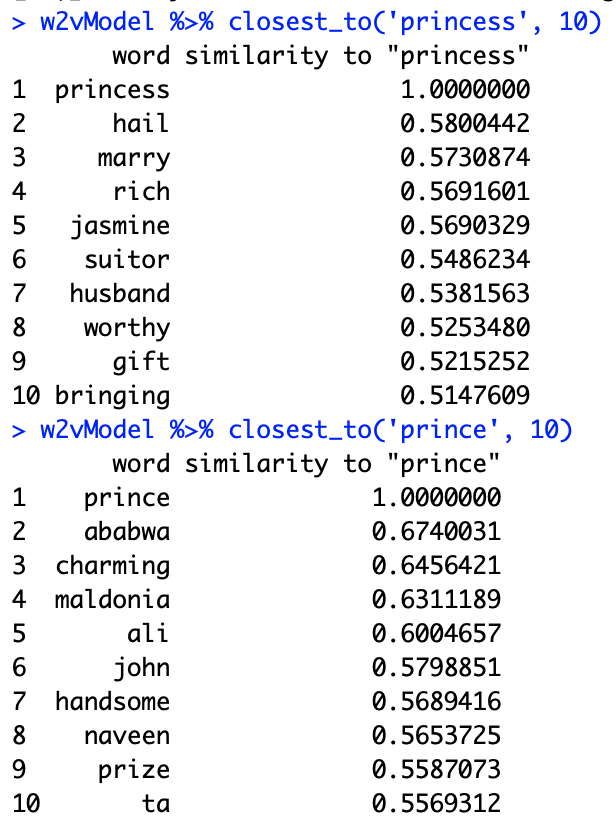 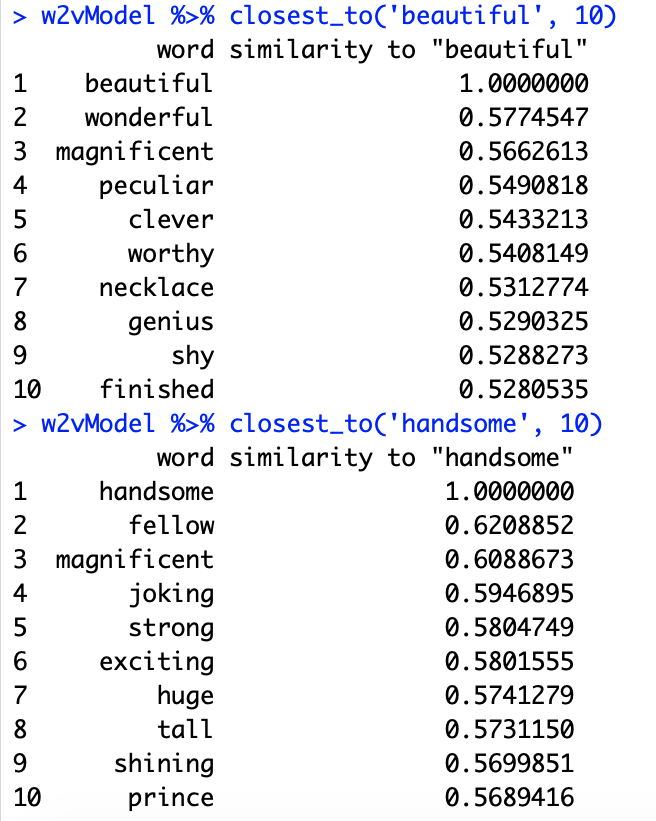 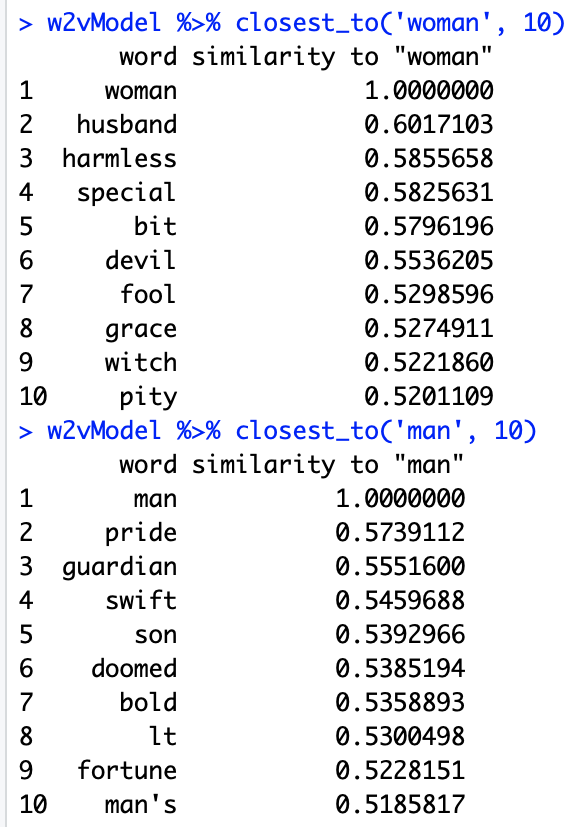 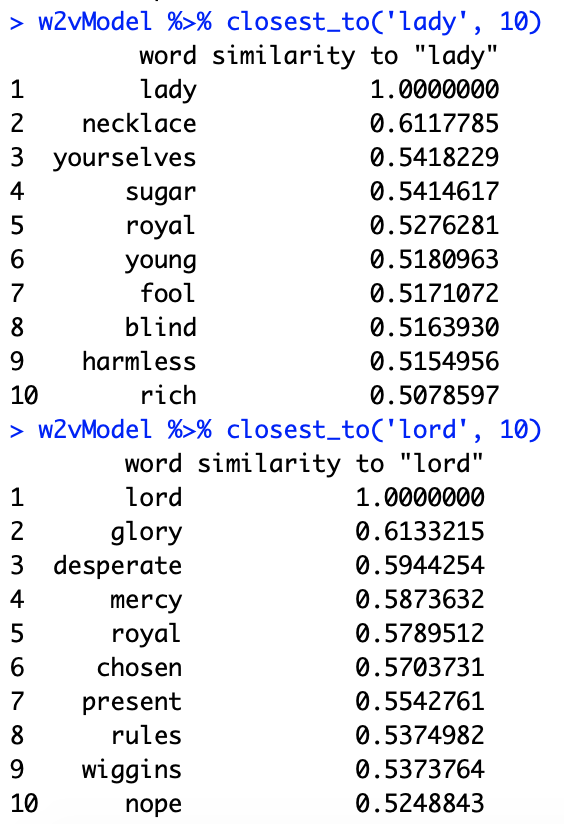 When I looked at the words wife and husband the results were especially interesting considering the word wife was often found alongside many negative words. For example despair, silence and desperate were words that appeared the most alongside wife. On the other hand the word husband was often found alongside more positive words such as chosen, prize and worthy. I thought this set up an interesting dynamic how these two gender roles are portrayed. It gave off the impression that being a wife meant being confined while being a husband meant being accepted by someone. I was initially surprised by how many negative words were associated with the word wife considering many princesses end up with a significant other at the end of these films. However there are also many films about princesses in which they object to the thought of getting married. 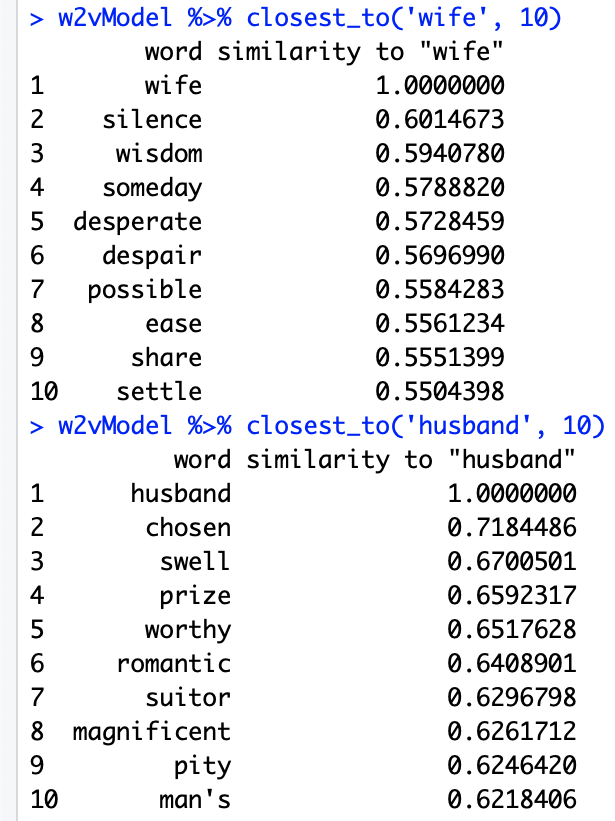 Prior to this I never really thought about the dialogue in these films much, since we tend to focus more on the visual aspects of these stories. But now that I see this information it makes sense that these patterns in dialogue are here. Disney films tend to go the more traditional route when it comes to portraying their characters, so although we might be visually shown many female characters doing things that seem defiant or not expected of them, they are still depicted and described in conventual terms of femininity when it comes to dialogue. When it comes to male characters the same can be said in conventual terms of masculinity. That being said I can conclude that the use of language in these films influence the portrayal of what is deemed feminine and masculine amongst male and female characters to some extent. Over all much of the language used does support traditional gender roles, highlighting both character traits that are deemed good and bad within them.

Lastly if I were to do this again I would definitely incorporate more films into my corpus just to get more results. In the future I would also hope to compare how language associated with men and women has shifted between new and old disney films.

Beauty and the Beast

Snow White and the Seven Dwarfs

The Hunchback of Notre Dame

The Princess and the Frog