Introduction to the Chosen Articles

My Connection to the Articles

As a Vietnamese American in the midst of both the pandemic and a time where Asian-American hate is becoming more prevalent and known, I wanted to more concretely explore my ethnic identity, especially since the idea of being Asian American is such a new, developing culture. In particular, I wanted to read through the stories of Vietnamese immigrant families who were in the same position as my own family. For myself, as a second-generation immigrant who has strayed away from my own family culture into a new amalgamation and mix with an American one, I wanted to explore more of the initial fear and experiences of the first generation immigrants, who I have heard about from my parents but never truly researched. Upon reading about their experiences, I found myself thinking about my hometown, Jersey City, which I am proud to say is considered one of the most diverse mid-size cities in the U.S. Although it isn’t perfect, it wasn’t until I came to Northeastern University that I realized how diverse my hometown was, and how lucky I was to be able to be around so many different cultures in such a common setting, and how important that can be for immigrants from all nations. So with that, I chose my first article on Vietnamese immigrants, published in 1985, and my second article on Jersey City, written in 1997.

Historical Context of the Chosen Articles

The first article I chose on Vietnamese immigration was titled  “For Many From Vietnam, Life in U.S. is Still Hard,” from the New York Times Archive. The New York Times is an American newspaper based in NYC, and has a long history and is well read by many people globally. This article was published in 1985, and focused on how Vietnamese immigrant families were settling in. 1985 would mark 10 years after the Vietnam War ended, where there was a period of time where many Vietnamese where emigrating from Vietnam to escape the war, communist rule, and to find better lives in America. Unfortunately, settling into America was a negative experience. The first damage would be the mental issues that persisted among immigrants scarred from the actual escape, something that was neither addressed or understood among the immigrant population who were more worried about direct survival. Next would be adjustment into a foreign land, including language barriers, finding work, and xenophobia. Lastly, their is the idea of great loss. From loss of culture, homeland, and position of life, moving to America was a great blow to a people who valued their families and homeland so largely, especially with raising children in a new environment. As mentioned before, the combination of both Vietnamese and American ideals creates a culture so separate from what previously existed, that it can be frightening to experience and notice that change from an older perspective. 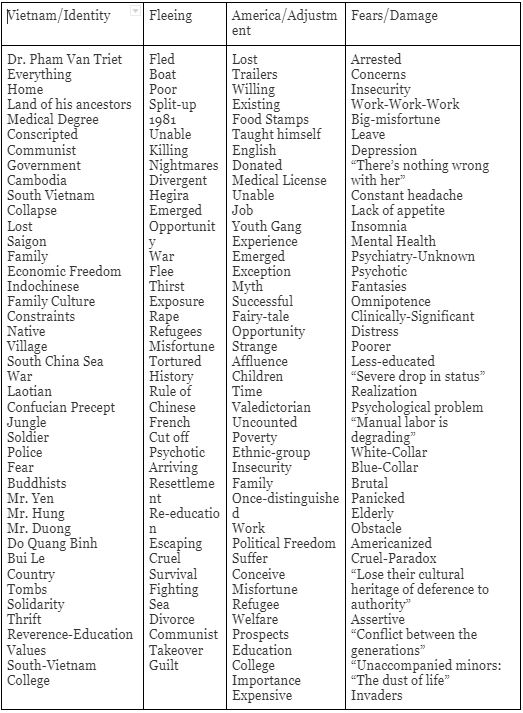 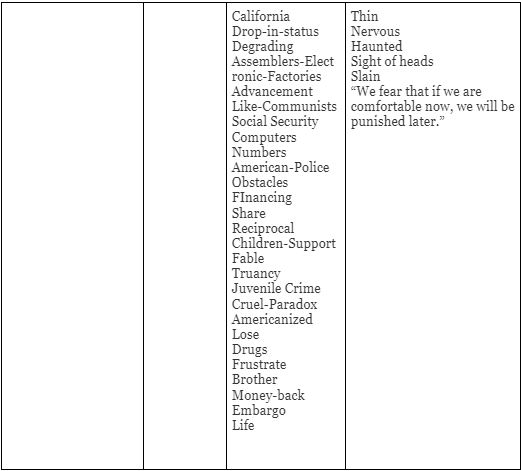 The article provided focus on immigrants leaving the country, adjusting to life in America, the country that they left behind, and the fears that immigrants face after living in America. As a result, those were the 4 general categories I used to divide words into different contexts, and to eventually make my poem with.

The archive that I found my second article through was called NewsBank inc., which archives media publications such as newspaper articles and other various pieces. Titled, “Diversity Breathes Free In Jersey\ Like the State, Jersey City is a Cornucopia of Cultures. The City has Declared Itself A “Safe Haven” for Immigrants.” This particular article was taken from the Philadelphia Inquirer in 1997. Geographically, Jersey City and Philadelphia are quite close. Philadelphia is known for being a diverse city as well, but is known to be a segregated one, meaning that ethnic groups are highly concentrated in different areas. The article itself is written on a recent resolution in which the city councilman labeled Jersey City as a “Safe Haven.” Speaking on the history of Jersey City and immigrants, it provides an objective view of how immigrants have become a part of the city and integrated themselves, particularly due to the presence of Ellis Island as well as it’s proximity to New York. Personally, I especially enjoy the visual description of the streets in which I have been myself, highlighting the diversity of the cultures present in the food, markets, and general stores. 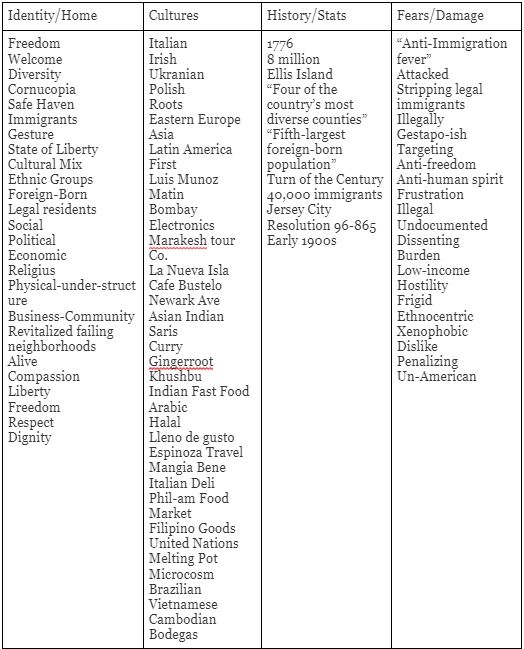 This article focused on the positive aspects of Jersey City, an emphasis on the various cultures and immigrants, a historical background of Jersey, and also anti-immigrant resentment that was present in Jersey. With this selection of words and contexts from each article, I began to devise poems that would attempt to challenge the meaning of the original article. 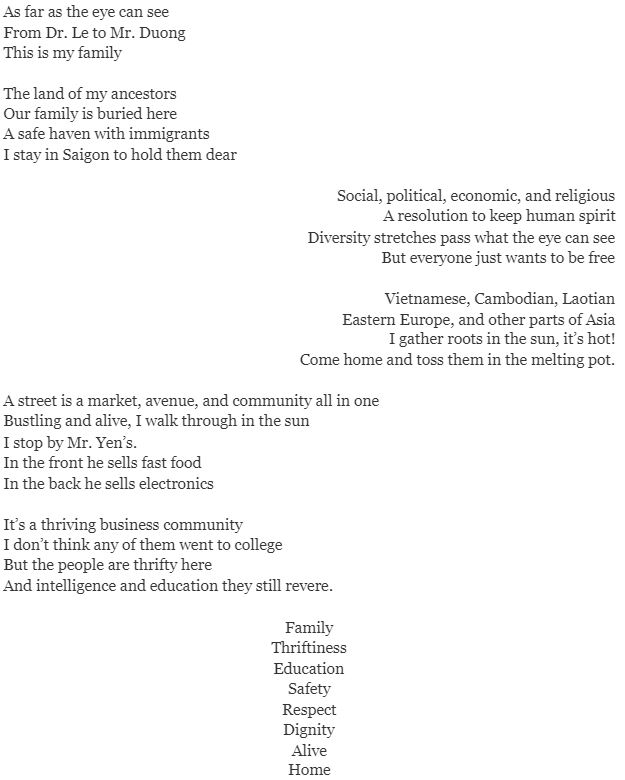 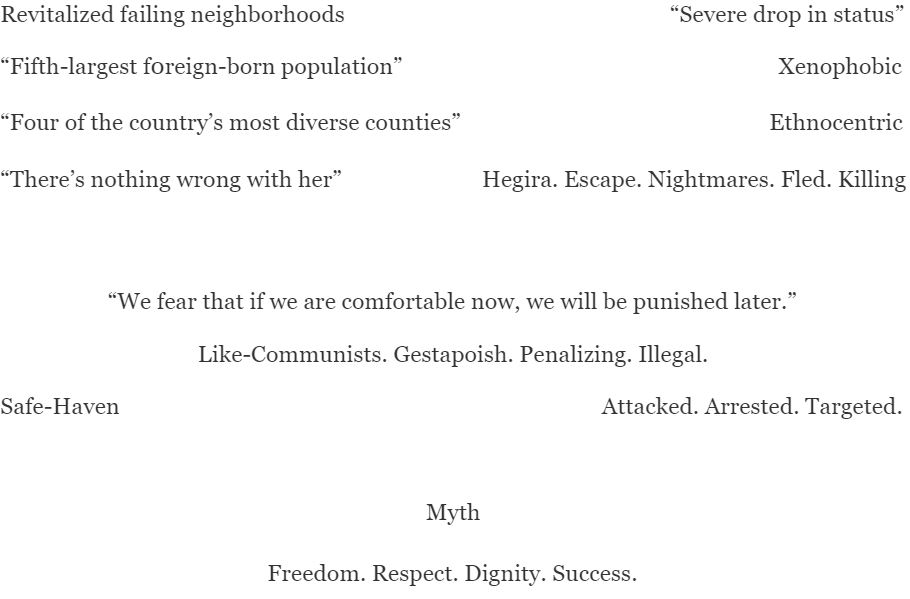 As someone who doesn’t often read or write poetry, I tried focusing mostly on the ideas of challenging or rewriting the intended idea of the article in order to highlight something that goes less unnoticed. For the first article, titled “A Jungle” I wanted to highlight essentially the beauty of Vietnam as opposed to how it was written about in the article. Especially during the historical context of the Vietnamese War, Vietnam is often described as this “jungle,” filled with communists, negativity, and place of war. In this article, they also note the importance of homeland to the Vietnamese people, but they don’t truly depict Vietnam as a home for the Vietnamese people. As a result, I took the positive aspects used to describe Jersey City as a home for immigrants, and tried to recreate the picture of Vietnam that most immigrants might fondly remember from my brief visit there when I was rather young. One of things they did note in the article was that the Vietnamese had, “old Vietnamese values of family solidarity, thrift and reverance for education.” which is what I tried to highlight. The poem itself is free-verse, and I tried structuring it in the way that would look like a tree, similar to how one would look like in a jungle, a place that can be unknown but can also have separate beauty.

For the second poem, “It’s Pham, not Pham,” I wanted to rewrite the very positive attitude that Jersey City is written about, and to highlight the difficulty in actually entering America for an immigrant. The name itself is a reference to mispronunciations of my last name, which isn’t obstinately negative, but is something that is part of life as someone with a foreign last name. In particular, the hardships that immigrants have to go through are often overlooked in favor of a few positive success stories or statistics, so I remixed the many negatives that immigrants escaped from in the first article with the positives and hopeful ideas present in the Jersey City article. Although I am proud of my hometown for being a very diverse place, I would say there is never enough coverage on what had to happen to get there.

Reflecting on the Analysis of Each Article

As for the actual analysis of each article in each different context, I can understand why the author would call it “butchering” the text. The content of my articles was not nearly as gruesome or negatively connotated, especially since they were modern newspaper articles that were meant to be written objectively, but looking at each article through each different context provides background on both the writer’s perspective and time period. It was an interesting look into something I never used to value or notice directly as part of my identity, but it’s a part of the past that led me to who I am today. As a result, I feel I’ve gained a new appreciation for both the value of ethnicity as well as my hometown and I am grateful for the opportunity to have done research on it.