Using Instagram, I found two accounts that tell different narratives about the school I currently attend: Northeastern University. Northeastern SpeakOut is an account where survivors of sexual violence at Northeastern can anonymously share their experiences. April is Sexual Assault Awareness Month. Although this is not something I’ve personally experienced it is something that I’ve had to keep in mind. It is one of the most prevalent issues in the world, on college campuses, and especially for freshmen. Nuadmissions is Northeastern’s admissions instagram. It displays the aspects of the school that administration wishes to present to their customer base of incoming college freshmen. It is basically an advertisement on why people should go to Northeastern and therefore only shows the best, desirable aspects of the university experience. This is a stark contrast to my first source. With this in mind, I decided that I would like to create a poem that raises awareness about sexual assault on college campuses and honors the stories of survivors.

History of the Archive

An archive is a collection of historical documents or records providing information about a place, institution, or group of people. The internet itself is an archive and in a loose sense so are Instagram posts. Instagram is a place where users can document their personal lives, interact with friends, share their stories, advertise their businesses, and more. Since its creation about a decade ago in 2010, Instagram has gained somewhere close to 1.074 billion users worldwide, becoming one of the most popular social media apps. Northeastern SpeakOut is an affiliate of Northeastern SARC and is a relatively new account that has been sharing survivors’ experiences since August of 2020. It has a following of 1,252 and a total of 38 posts. In comparison, Nuadmissions has a much larger reach but less. It has been posting since 2014 with a following of 9,928 and total of  866 posts. Both are public archives.

Thoughts on the Act of Remix

In both poems I used a printed silhouette as a base template for the poem. I then physically printed out my transcriptions of the archives, cut them up with scissors, rearranged the pieces cohesively, and then glued them down. I then scanned the physical papers into pdfs with CamScanner. Words and phrases that appear in the silhouette are sourced from Northeastern SpeakOut, while words and phrases that appear outside the silhouette are from Nuadmissions. This creates a sense of internal trauma and personal experience versus the external experience promised to us by Northeastern. I decided to use the same style in both poems to create a sense of cohesiveness as well as contrast because they are on the same subject but portray different aspects of said subject. My thoughts on the act of remix are that it reduces the workload of the poet. Instead of having to create raw original content on their own, sourcing words, vocabulary, emotions, remix gives the poet premade content for them to shape and direct accordingly. Inevitably in creating new meaning through the act of remix, some meaning and content from the original source are lost. Both of my poems are found poems. Found poetry is a type of poetry created by taking words and phrases from other sources and reframing them by making changes in spacing and lines, and by adding or deleting text. Creating a found poem is an act of remix itself which I found fitting for this assignment. 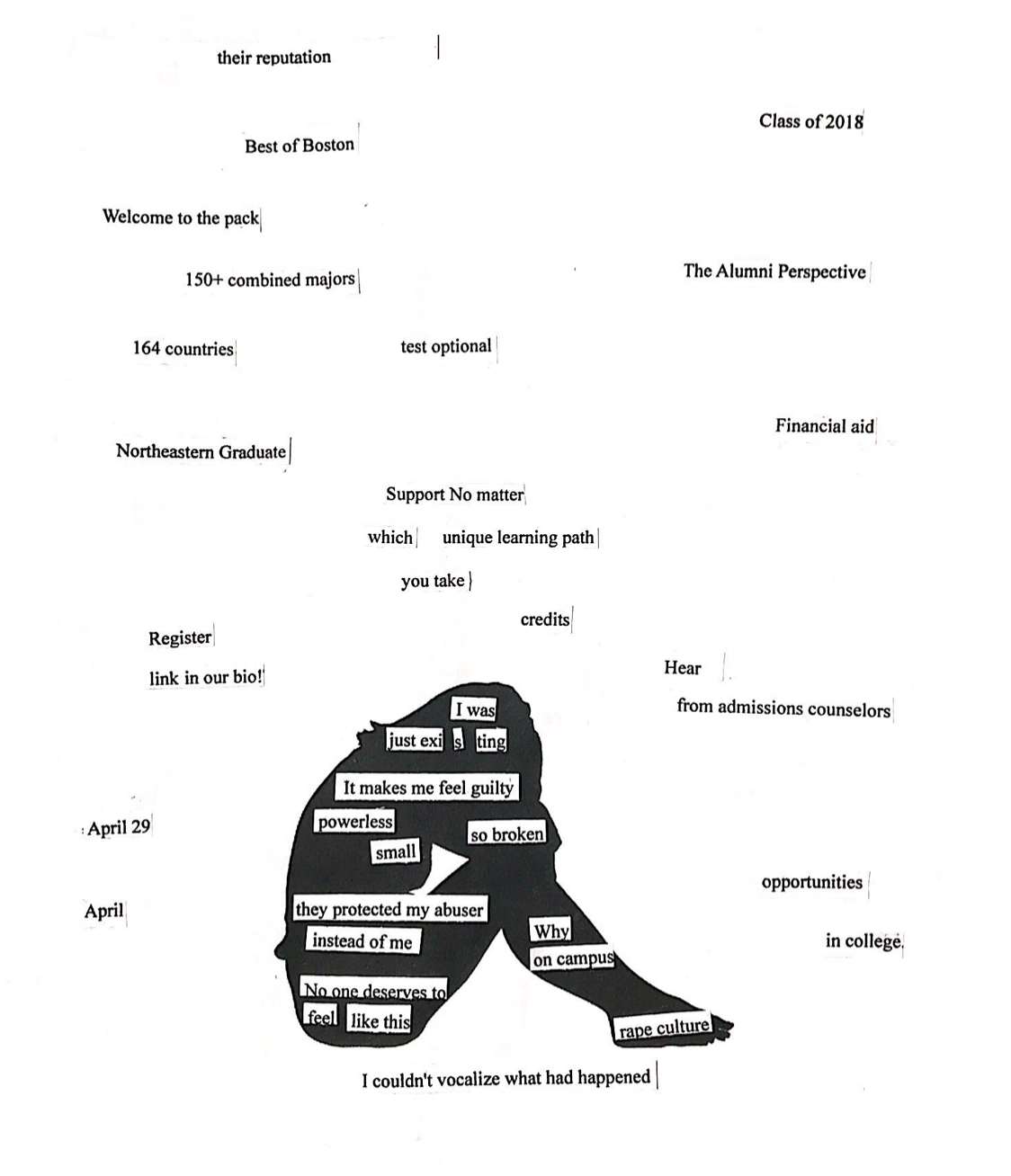 My first poem, “External to Internal” shows the silhouette of a person curled up on the ground. This poem is about internalizing an external experience of sexual assault. The silhouette creates a sense of anonymity as well as portraying the physical as well as emotional trauma caused by violation of consent. This pain is accompanied by a sense of solitude, isolation, and helplessness which stems from a loss of faith in the university administration; a force that promised to support them, but is instead hilariously disconnected from their reality. This disconnect is demonstrated in the huge contrast between the messages outside versus inside the silhouette. This work was largely inspired by a anonymous survivor who said, “Northeastern doesn’t seem to actually care about getting their students justice, they just want to protect their reputation.” With this poem I hope to enhance the voice of this survivor. 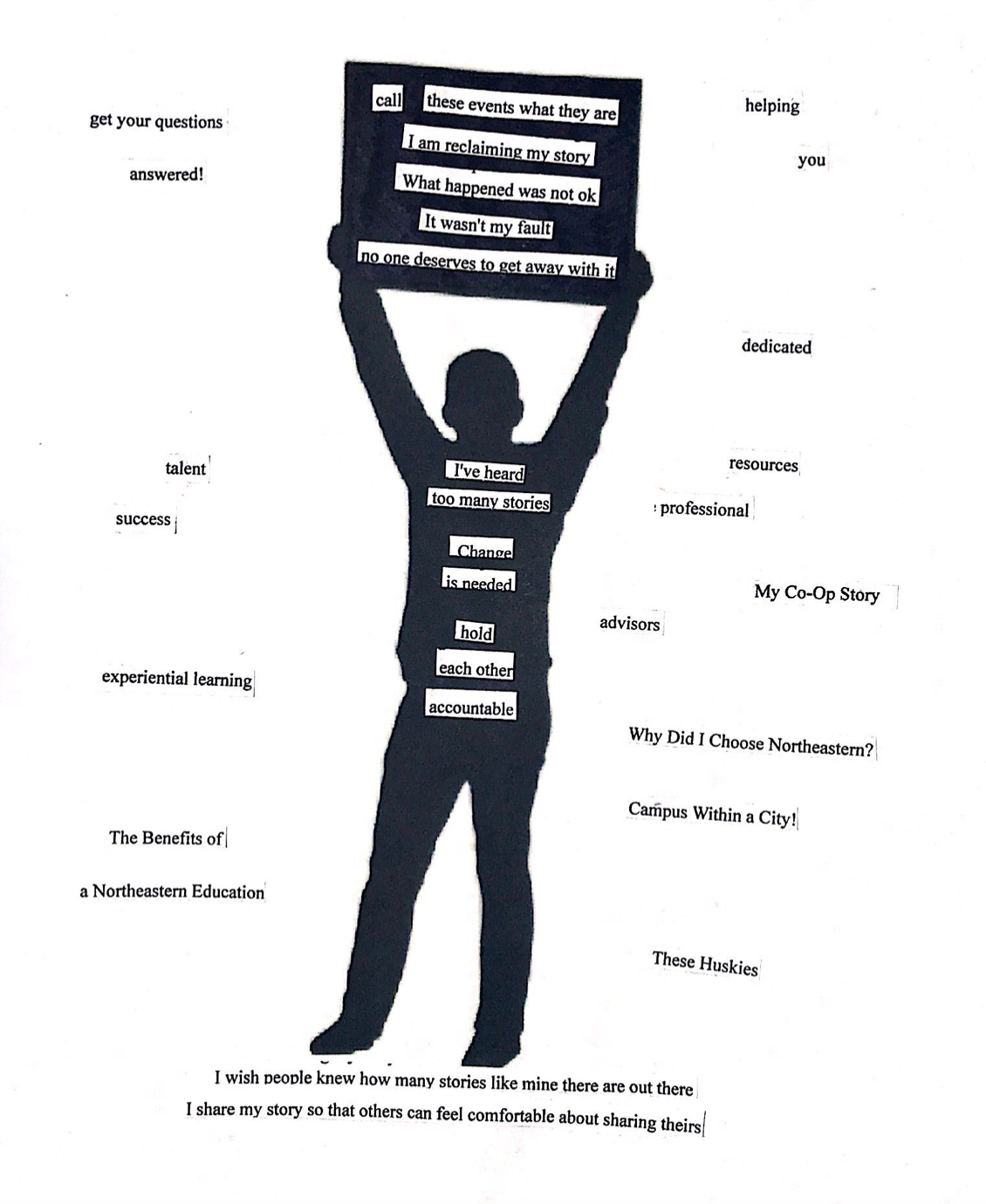 My second poem is a contrast to my first poem which is why I named it “External to Internal.” This poem shows a person protesting. They are presenting the experience they’ve internalized back out to the external world in hopes of raising awareness and becoming a catalyst of change themselves. Sexual assault is never ok and is never the victim’s fault. Change is needed and perpetrators of sexual assault must be held accountable. This work was inspired by another anonymous survivor who wrote, “I had absolutely no faith that any sort of Northeastern involvement would do anything to help me.” This very much gives me the vibes of ‘Northeastern wouldn’t listen to me, so I had to help myself.’ After all, protest is the language of the unheard.

Overall, I thought that being able to work with and remix pieces of paper and shuffle them was much more satisfying than the process would’ve been if it were done completely digitally. I enjoyed the physical aspect of being able to move phrases around and organize them aesthetically. This project has made me think more deeply on the faults in the system and the intersection of patriarchy, sexism, and violence. I’m incredibly disappointed in the ability of humans to do terrible things to other human beings. It’s sad that this is something mothers have to worry about happening to their sons and daughters. It’s sad that children have to grow up being told what not to wear, when not to go out, and where not to go. Sexual assault is a worldwide problem and has been for centuries. Despite this, there is still hope. Every effort to raise awareness is a step towards real actionable change. Since the #metoo movement of 2006, great leaps have been made in the direction of progress. It has been a honor to participate in the ongoing discourse.