I grew up in the heart of Saratoga County in upstate New York. While an incredibly historic location, almost all of the surrounding towns are unrecognizable to anyone not from the area, which is why I usually have to turn to naming landmarks to get any semblance of an affirmative nod from others (the Turning Point of the American Revolution and the summer home of General Philip Schuyler are often my go-tos). Because my home is located almost directly in the middle of multiple historic hamlets, my young life was essentially split between the two closest towns: Saratoga Springs and Schuylerville.

Saratoga and Schuylerville are different in every possible way. The former is a city of old money, with thoroughbred racing, rowing, and world renowned mineral springs being among its most important aspects. The arts are also incredibly important to Saratoga; the National Museum of Dance, Saratoga Preforming Arts Center, and Yaddo are stops many make on their way through town, no matter which direction they’re going. Schuylerville, to put is bluntly, is nowhere near as idyllic as Saratoga seems to be. Any old money in the village comes from generations of dairy farmers, cows and corn are much more important that horse racing, and most residents find themselves working blue-collar jobs nothing like the modern positions in Saratoga.

Through this assignment, I wanted to work to flip the narratives surrounding these two towns. Using the language of two archival documents I found (each of which portray either Saratoga or Schuylerville in a very specific light), I set out to craft poems that were much more representative of my experience in the places I grew up — an undertaking that resulted in almost complete 180 turns in the original purpose of the archival text.

My first document is pulled from an introduction to a souvenir photo book of Saratoga Springs. The book was published in 1906 by the Saratogian, one of the town’s newspapers, and is now held by the Library of Congress. As one might expect to be the goal through a book of photos, this text paints Saratoga as the perfect location, from its beautiful “emerald lawns” to “the healing balm of flowing waters.” 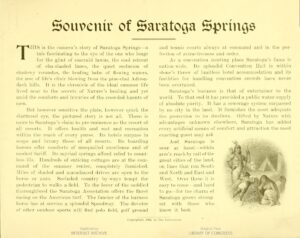 I was quite intrigued by this text for two main reasons: how important Saratoga was to the leisurely lives  of presumably very rich people, and the inclusion of an image of Native American individuals at the bottom right despite them never once being referenced. As the souvenir book is ultimately an advertisement for the city, my goal was to attack this message by attempting to reveal the consequences of the beauty described in the text, and to allude to the effect these efforts had on the land and its rightful owners.

With this piece, I was quite obviously interested in highlighting the negative aspects of the city in various ways, beginning with a broad statement claiming that there are secrets lurking beneath all of the glitz. The Saratoga of the past is rather similar to the Saratoga of today in that it is always striving for a level of perfection and order. From the Raceway, to luxury hotels, to landscaping of public parks, Saratoga has been consistently working to be picture-perfect. However, the city forgets about its disenfranchised more often than not. Tourists take precedent over residents, BIPOC Saratogians are often ignored in their experiences with the police, and land around the city itself is often bought-up to build ridiculously expensive cottages.

Below is my remixed poem: 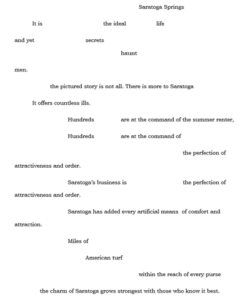 My second archival document comes from the New York Times Archive — an article from 1990 by James Howard Kunstler titled “Schuylerville Stands Still.” The piece is rather long, detailing the author’s experience living in Schuylerville after being priced-out of real estate in nearby Saratoga Springs. Essentially the opposite to the previous archival document, “Schuylerville Stands Still” showcases the village as an incredibly terrible place with little-to-no redeeming factors. The article is a description of the town that many residents remember and resent to this day. As is the case with many small towns along the Hudson River, Schuylerville boomed in terms of water-powered industry, was left behind in the Reagan era, and never caught up, forever stuck in a limbo of no local economy and unfortunate citizens. Though Schuylerville is far from a perfect place socially, economically, and politically, the description written by Kunstler doesn’t sit right with me either, which is why I wanted to pull from some of the descriptions offered by townsfolk and the author himself to redefine Schuylerville in a more positive light, one influenced by my own experiences.

This piece gives the reader the perspective of a resident of Schuylerville who is here a male farmer. Here, I specifically focused on taking words and passages from parts of the article where Kunstler speaks negatively of the town, or, more specifically, about the problems ailing the area. “Using tree limbs for hockey sticks,” “the old decaying village,” and “single-parent families” all point toward the poor socioeconomic status of the entire village. Despite all these negative traits, I wanted to find the beauty in them by emphasizing the natural beauty of the village as well as the narrator’s love for his small-town experience.

Below is the remixed poem: 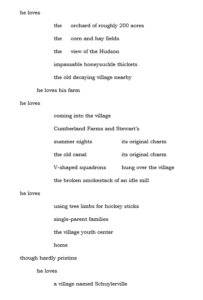 Overall, I felt this assignment was a truly fascinating process at every step. I found myself getting lost in archival material on my hometowns — from building blueprints to postcards — something I had never though possible due to their size. Making the poems themselves was much more difficult than I had anticipated, but, for lack of a better word, fun nonetheless. The complete stylistic freedom in crafting each poem opened many doors within the process; I cycled through many different concepts before deciding to format my poems in the ways they are shown above. I decided to play with the location of the words on the page to create a similar effect to what we saw in ZONG! by M NourbeSe Philip, though initially, I wanted to redact or blackout the text I did not need to visually show the changes I was making to the archival documents. Unfortunately, the formatting of the Saratoga Springs souvenir book and sheer length of “Schuylerville Stands Still” stopped me from following my original plan.

That said, the most interesting parts of the remixing process did not come from the actual creation and styling of the poems, but instead from the personal experiences I ended up inserting into each piece. While both Saratoga Springs and Schuylerville are incredibly important to me (as has been made quite clear), I had never really known just how important they were until sitting down to build poetry. I feel that I am a part of both the Saratoga and Schuylerville communities, despite being split between the two. The concerns of the city of Saratoga Springs are radically different from those of the village of Schuylerville, but in each case they pertain to me in one way or another. What this archival remixing assignment revealed to me was just how connected I am to both of these locations, and how important it was to me to convey their true characteristics.