The two documents that I chose for this project were state records regarding witchcraft in the 1600s. They came from the Massachusetts State Archives as part of the Massachusetts Archives collection. The Massachusetts State Archives houses public records, or information that is recorded by public agencies (including federal and local governments). I wanted to choose archival documents that came from the state archives because I worked there as a reference assistant for my first co-op so I am familiar with the kinds of records they hold and I know how to effectively use their online database. This collection is special to me because I once spent time looking through records regarding witchcraft for a researcher. As a reference assistant, I mostly found records that were relevant to researchers’ area of study so I rarely got the opportunity to do my own independent research. When I found out we got to pick our own documents for this assignment, I was eager to scroll through the online card catalog to find archival documents that interested me.

History of the Massachusetts Archives Collection

The Massachusetts Archives Collection includes the original records of the governor, General Court, Council, secretary, and treasurer from the years 1629-1799. There are 328 volumes in this collection that are bound as scrapbook volumes. It was originally organized by Rev. Joseph Felt in the 1830s. They were subsequently made available to view as microfilm and now digitally on the website Family Search (although the original copies are still available to view in person at the archives).  Family Search is a nonprofit organization run by The Church of Jesus Christ of Latter-day Saints that offers digitized genealogical records. This organization partnered with the Massachusetts State Archives to digitize vital records and records from the Massachusetts Archives Collection. Regarding witchcraft, the Massachusetts State Archives holds records relating to depositions, examinations, warrants, petitions and other relevant court documents. 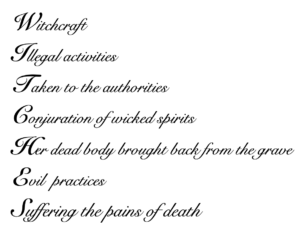 I wrote two poems based off of the documents I found. The first document is a bill that declares witchcraft illegal and punishable by death. The bill describes what constitutes witchcraft; it provides a broad definition that discusses conjuring evil spirits and bringing people back from the dead. This document is in the Massachusetts State Archives because it is a legislative document. The state archives hold public records from the commonwealth, and since this bill was of legislative importance, it is housed there.  For the first poem, I titled it “Witches”, and it is an acrostic. The poem itself describes what witchcraft is as seen in the bill, and what will happen if people are accused and found guilty of it. I start by expressing that what they are doing is illegal. Women will be taken to the authorities if accused. I describe different acts of witchcraft described in the bill, such as conjuration of wicked spirits and bringing people’s body’s back from the grave. The last line is the most powerful because it says “suffering the pains of death”. While there were other sentences for witchcraft (such as imprisonment), death is the most extreme punishment for women who are found guilty. I chose to use a cursive font for the poem because that is what is used in the original archival document. I thought it would be interesting to visually display the type of writing that was used during the time period.

This poem is short and to the point. In a way, it simplifies the context and history surrounding witchcraft. The poem is only seven lines long and each line contains only a few words. I chose to make this poem short to reflect the way the witch trials in Massachusetts are represented in the present day. Many women were imprisoned and lost everything because of false accusations made about them. Their history is generally somewhat trivialized.  The way the poem is written has a similar intent. I briefly list what is considered to be acts of witchcraft. Without elaborating much, I end the poem by saying “suffering the pains of death”. It demosntrates how quick the govenment was to lock women away as well as the extremity of the punishments.

“Petition of the Inhabitants of Andover” 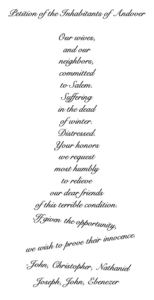 The second poem is based on a petition by various men living in Andover regarding their wives’ imprisonment. Their petition is addressed to the governor and the Council in Boston. Similar to the previous document, it is located in the state archives because it is a public record. It is in this specific collection because it relating to the governor and the Council. The men explain that these women are suffering in jail. It is the dead of winter and the conditions they are in are unacceptable. As a result, the men go to the court and see if they can try and prove the women’s innocence. I was particularly drawn to this document because it offered a different perspective on witchcraft. It was slightly more positive because these men were out there trying to protect their wives from false imprisonment.

For this poem, I also used a cursive font to reflect the original document. I made the poem in the shape of a stake as a sort of double entendre. The stakes are so high for these women, that if the judge decides, they will be taken to the stake and will die.  This reflects the desperation of the men petitioning. Visually, the first several lines of the poem are one to two words that form a thin, vertical line. Towards the bottom, the lines are longer and slanted horizontally. This makes the bottom half of the poem look like the wood that people would stand on when being burned at the stake.  This poem is written in the first person from the perspective of the petitioners. They describe how their wives were taken and how they are suffering. They respectfully request the opportunity to prove the women’s innocence. I included the first names of the men petitioning to make it personal and so the reader understands that the witch trials affected many people’s lives.