I have always had an interest in World War II and all the different events that transpired during that critical time period. It fascinates me to study and read about stories of perseverance and hardship, and how that generation’s experiences shaped our mentality of war and patriotism today. However, one aspect of the war that is not commonly spoken about is the role that women played. Accomplishments and contributions of women and minorities are all too-often overlooked in American history, so I wanted to further look into how they were talked about during the war.

This project was a perfect way for me to explore this curiosity of mine, as word2vec allows me to compare and contrast words and topics across several texts. This type of textual analysis in the digital humanities gives a deeper insight on issues and questions that cannot be answered merely by focusing on one specific text or perspective. Therefore, there was no better way to analyze and compare the rhetoric surrounding accomplishments by women during the war to those of men.

I first went to Project Gutenberg to start my corpus, remembering from an in-class practicum that it had an abundant amount of texts ranging from different time periods and topics. I began by choosing texts that seemed to relate to women during the war, most of which were works of fiction. I then decided to expand my scope to texts that maybe had no relevance to women, or no mention of them at all, to research how women were discussed and referenced to in texts that were not concerned with gender. After choosing and downloading thirteen texts, I began thinking about how I wanted to prepare my data. Luckily, my data preparation process was not too elaborate, as all of my text files converted beautifully from Project Gutenberg. I started out by stripping all the meta data in each file, including the Project Gutenberg introductions and copyright information. Additionally, as a lot of the texts were works of fiction for children, they contained a lot of illustrations. For many of these texts, I removed all the illustration references and notations, as they had no relevance to my queries. Several texts also contained a table of contents and page numbers, and I removed all that data as well.

I then trained my model into RStudio. Following the procedure, I successfully read in all the texts in my corpus, and was able to begin my search queries. I centered my research around the following questions: How are women’s accomplishments during WWII described and discussed compared to men’s accomplishments during the same time period? What attributes was women’s labor associated with (given certain keywords)? How were women represented in the context of victories and praise? How frequently were they credited compared to men?

Although some of my initial results were informative, I was expecting the majority of them to be much more groundbreaking than they were. However, the few findings that surprised me invigorated me to dive deeper into the search queries. The first thing I looked at were the analogies. I began by searching for ‘men’ – ‘strong’ + ‘women’, and received the results you see below. 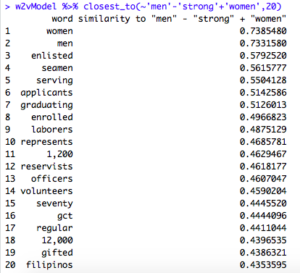 I did not find any of these words to have much relevance or information about how women were portrayed as strong during the war, as almost all of these words are gender neutral. So, I instead tried ‘man’ – ‘war’ + ‘women’. These produced a little more interesting results. As seen below, a lot of these words reference women, such as “ladies”, “wacs” (women army corps), “girl”, and “lady”. However, a lot of other words came up that do not necessarily reference women, but have feminine connotations, or are commonly associated with women, such as “babies”, “dancing”, “child”, “companion”, and “caretaker”. Additionally, there were other words such as “startled”, “frightened”, “slower” that also commonly have feminine connotations, but are negative, or seen as inferior. 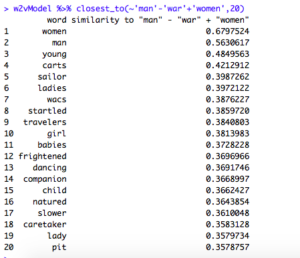 I was pleasantly surprised at first, because I was honestly expecting more than merely three negative words that were associated with women. However, I then remembered that most of the texts that I chose that were directly about women were works of fiction, and when a woman is the protagonist in a story, it is uncommon for her to be described using words that demean her. These results were a preliminary indication of the words that were used to describe and talk about women in the war when men were taken out of the picture. Going further, I wondered what would appear when I simply searched what words were closest to “woman” and “man” as individual, separate words. I immediately saw a difference. The fourth word that was most commonly 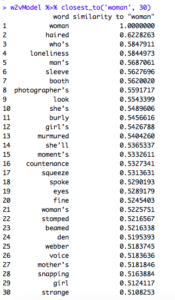 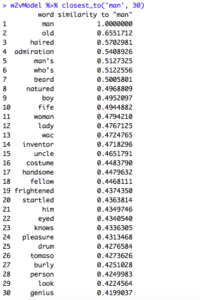 associated with a woman was “loneliness”, whereas the fourth most commonly associated word for a man was “admiration.” Although this makes sense, considering a lot of women had their husbands, boyfriends, brothers, and fathers go off to war, it is almost unsettling that it was so frequently used to describe women. Additionally, a lot of other words in the results for “women” pertain to their physical features, such as “countenance”, “eyes”, “voice”, and “look.” This is a stark contrast to some of the results produced from “man.” For example, common words that were used in reference to men were “inventor”, “pleasure”, “burly”, “handsome”, and “genius.” Even when I changed the search number to upwards of fifty results, no words remotely similar to those appeared for women. This shows that even though almost half of my texts are works of fiction, when women were described or portrayed in a positive way, it was rarely to the same standards as men. They were credited with other attributes, pertaining more to their physical appearance, whereas men were considered highly more for their minds or their physical strength. I was intrigued to move onto more specific search queries, as these first results gave me a solid foundation for my research questions.

I next used the function that examines the space between two things, and what is closest to them, using ‘woman’ – ‘triumph’, as I wanted to see how women’s achievements and accomplishments during the war were talked about, if at all. I received odd results, as can be seen in the image in the bottom left; almost all words were related to forms of travel. Words like “cars”, “trip”, “ferry”, “taxi”, and “traveling.” However, I then remembered that one of the texts in my corpus was a guide for women on how to travel with babies during the war. I tested the same function with ‘women’ instead of ‘woman’, and received vastly different results (as seen in the middle image below). Much more official, almost industrial, words related to war appeared, such as “laborers”, “men”, “depots”, “operated”, “serving”, etc. I’m not entirely sure why two words that are essentially the same, only different tenses, produced such different results, but I found it interesting to see that when a woman was mentioned as an individual, the space between ‘woman’ and ‘triumph’ mainly had to do with traveling and being a caretaker. On the other hand, when it was women being talked about collectively, the space between the two words became much more official and similar to war rhetoric. 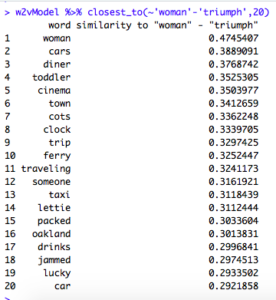 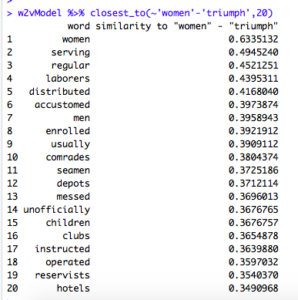 These results fascinated me so much that I decided to conduct a similar experiment on a different function- one that compared the closeness of the two words, rather than the space between them. In other words, what results are produced when triumph is being associated with a singular woman, versus women as a whole. The implications of the results to this function were closely similar to those of the last function. When I searched ‘woman’ + ‘triumph’, a lot of words related to physical features of a woman came up, such as “lips”, “smile”, “eyebrows”, “countenance”, “face”, “eyes”, “teeth”, and “elbows”. Having a woman being described as triumphant only in terms of her physical qualities is basically what I expected from this result. Other alarming terms such as “betrayed”, “ashamed”, and “loneliness” were commonly used in relation to a woman and being triumphant. However, when I ran the function with ‘women’, the results were strikingly different. Words such as “loyal”, “america”, “genius”, “WACs”, and “patriotic”, which all have positive connotations, were among the most frequently used. 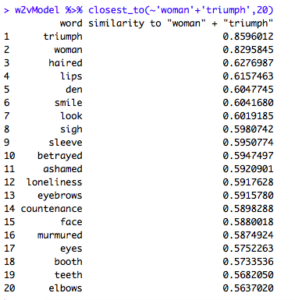 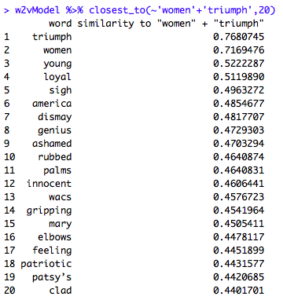 In general, women were praised more when spoken about in generalities rather than on an individual basis. I believe that this may be because of the role that mothers and women on the home-front played, in terms of the domestication of women in that time period. As shown by these results, women were more likely to be glorified and praised with words commonly used to glorify and praise men when they were referenced as an entire gender. As can be inferred, a singular woman was more often spoken about in terms of mother roles and feelings of grief about the men at war, explaining words like “sigh” and “loneliness.” 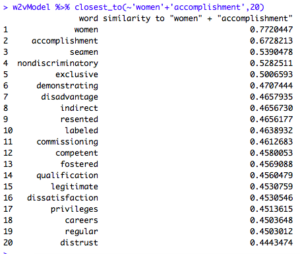 Furthermore, when I searched for the closeness between ‘women’ + ‘accomplishment’, the results to the left were produced. Most of these words are negative, such as “disadvantage”, “resented”, “dissatisfaction”, and “distrust”, while most of the other words have mild praise correlated to them, like “competent”, “qualification”, “regular”, and “legitimate.” This corpus, although women are widely mentioned, gives little credit to women and their accomplishments during the wartime.

These results and search queries align with work that writer Joshua Goldstein discusses in his book, War and Gender. He elaborates on the stigmas and roles that men and women play in wartime and how those roles have an impact on society. In his section on women, he explains, “In every society at war, women workers help to sustain the war effort. Most of this work is unpaid, and largely unmeasured … Such new gender arrangements boost the war effort, but are typically cast as temporary” (Goldstein, 2001, pp. 380–396). This claim is further supported through the results of this past search query, as well as the ones that associate with women’s and triumphs. This research shows that women played a monumental role in the war, but their participation and contribution is practically discredited and not seen as a plausible long-term commitment, solely because they are women.

Overall, this implementation of word2vec analysis has been informative and, unfortunately, not that surprising. It was no shock to me that a woman’s achievements during World War II were not nearly as talked about or acknowledged to that of a man’s. Women were more often than not thrown into the category of  domestic work and support, rather than critical participants of the road to victory against the Axis powers. Although we no longer live in an era of war, accomplishments and successes of women are ignored and underplayed in almost all professions. However, research like this helps to bring awareness to the unspoken heroes and, hopefully, encourage the start of a new age in which everyone, men and women of all ages, races, sexual orientations, will be recognized for their intelligence, bravery, and patriotism.