The following content contains profanity and some sensitive topics. This post will contain references to internet culture that may be sensitive.

This blog post serves to highlight how certain trends, known as "Memes," are developed on the platform known as Reddit. Reddit is a social content website that allows people to create subcultures known as "Subreddits" that are themed in specific ways. Each of these subreddits develops personalized trends as well as perpetuate long-running trends that are common to the platform as a whole. This post will assume that the reader has a basic understanding of how Reddit functions as well as a cursory understanding of what a meme is as a trend. I will also explain how I collected my data at the beginning of this post. This explanation will assume the reader has a basic understanding of the Digital Humanities and techniques used to create and evaluate a digital corpus, so if the nitty-gritty parts of this study don't interest you, skip down to the "Evaluation" section for the evaluation of the data after this introduction.

I will be evaluating data from the past 4 months of the subreddit r/WritingPrompts as to answer the question "How does r/WritingPrompts create memes?" This is a broad question that I will refine down to two key points. Firstly, how does a particular subculture personalize these memes? In the overarching culture of Reddit, there are a few popular themes that are considered "meta". Each individual subreddit has certain situations in which these memes are used or developed. One specific example of this is the "tree fiddy"(Know Your Meme) meme that originated from south park. Usually, there is some long piece of content that holds a story but ends in the iconic south park line. The whole post was a red herring just for the punchline at the end. "tree fiddy" is a meme that is particularly relevant on the subreddit that I choose because it consists entirely of stories based on a single prompt; hence the name writing prompts. Secondly, I will be looking at how popular culture influences what kinds of memes are created as well as how they are linked to other memes. In the past four months, there have been many movies that have come out, and they most certainly influence what kinds of prompts are posted on the subreddit.

The fundamentals of my research are set around a paper written by Adrienne Massanari, who studied the game like nature of Reddit as a platform. This nature fosters the creation and perpetuation of popular memes as being relevant allows users to gain points known as "Karma." This is especially relevant to my research as this gamification model incentivizes users to stay relevant and up to date which in turn causes the community to grow as a whole. Having this constant need to be relevant in posts brings in more influence from popular culture and creates a far more interesting study than say a study on how news culture evolves. Because Reddit is a platform that is used for entertainment and r/WritingPrompts is a culture that is based around fun, the results of my study stray from the norm of academia.

For the collection of my research data, I have utilized a Reddit scraper called PushShift. This is an API that utilizes the Reddit API to collect data for a corpus. The API allows for a highly customized collection of data which can include upvotes and downvotes as well as the username of the author of the comment or post. I decided to only grab the past four months of data because that already gave me a corpus of around 7 million words. I grabbed only the text of comments as things like popularity and author are not relevant to my question. It could be argued that I could have used a minimum point threshold for grabbing comments but I concluded that popular prompts would have more responses to them, and that would create a better corpus than only grabbing comments from already popular posts. This somewhat ignores the significance of gamification asserted by Massanari(Massanari, 2) but still supports his assertion in the fact that users will attempt to attain more Karma by responding to a popular thread. Due to limitations in the Reddit API, I was only able to grab 500 comments from each day. Even with the limitation, I found that the sample size was more than sufficient.

I used the API to grab all 500 comments and assemble them into a single text file, which I then used to train a model using the Word2Vec tool for R, (R being a script programming language). Word2Vec takes a corpus and finds associations between words as to show words that are consistently grouped together or sets of words that are frequently associated with each other. This tool is especially useful for finding what types of associations r/WritingPrompts gives to particular memes, especially if those associations deviate from the normal use of that meme. Word2Vec also produces easy to read tables (as seen to the right) that allow for easy evaluation of association. Using both of these tools I can somewhat accurately make statements about the corpus. 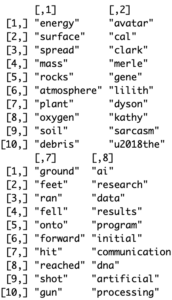 After training my model with Word2Vec, I used a couple of tools to evaluate the corpus. The main tool that I used was  Closest To. This function specifically allowed me to input a specific word and find all words that are associated with it. For example, if given the word "magic," the three closest association are "magical," "spells," and "power." (as shown to the left) Using this tool, I chose to focus on a few popular items that often occur to see how the user base portrays them. I have chosen to showcase specifically Bob Ross, Star Wars, and the movie Infinity Wars. Bob Ross is beloved by the Reddit community as a whole, and associations to him will reveal what specializations that r/WritingPrompts assigns him. Star Wars has many subreddits which are themed to it, specifically r/PrequelMemes and r/Sequel memes, and looking at how those subreddits leak into r/WritingPrompts will reveal cross culture influence well. Finally looking at Infinity Wars will show how popular culture influences the subreddit months after the movie originally came out.

Starting with Bob Ross, there is a Know Your Meme page on him, signifying his status as a meme. This page can be found here. With Reddit as a whole, he is associated with love, acceptance, and happiness. Using the Closest To tool I found the closest associations to the word "ross" to be "Hope", "You", and "Ken". The first two associations are things that I expected, but "ken" I did not. This association probably came from a specific post where one of the characters names was Ken. This may just be a fault of Word2Vec, or it might be because of a specific writing prompt that was very popular and had many submissions.  It should also be noted that the word "cunt" appears on the list of words, though even with some manual digging into the subreddit I could not find where the correlation may have appeared. Taking these associations into account, I find that even with other common memes that all of the themes are the same as every other subreddit. There wasn't much personalization in terms of how Bob Ross is viewed, but there are some interesting associations in terms of what he is doing. I choose to search what terms came up when I searched for "Ross" and "Fight" together. Word2Vec came up with the terms "Savior", "Lord",  and "Disrespect". I can only assume that the phrase "Our Lord and Savior Bob Ross" came up somewhere in the corpus. I manually searched for this on Reddit and came up with a prompt about the four horsemen of the apocalypse fighting Bob Ross, Jim Henson, Steve Erwin, and Mr. Rogers.

Moving on to popular culture, I choose to look at the impact that the movie Infinity Wars had on the subreddit. Starting off with a search for the term Thanos, one of the closest associations to it is Batman. This is an interesting comparison that was made because Thanos is the villain in the movie, with the goal of killing off half of all life everywhere. The fact that one of the closest associations to him is a hero is somewhat surprising. I looked into this by doing some manual digging and found that there are two other subreddits dedicated to the movie, R/thanosdidnothingwrong, and R/inthesoulstone. Both of these subreddits actual treat Thanos as a hero for bringing "balance" to the universe and allowing the remaining humans to flourish. This mentality seems to have seeped into R/WritingPrompts and has definitely influenced the perception of him. Other terms that are associated with Thanos are "wins", "Spiderman", and "Deadpool". I believe the Spiderman and deadpool similarities come from the superhero association, but they are both still heros and there are no relations to comic villains as I would have expected. Another query I chose was using the words "soul" and "stone" together. The only results I found from those was negative associations with words such as "darkness", "temple", and "bones". Temple is the only association that really piqued my interest but I again couldn't find where the association came from.