To begin with, the assignment for this project was to conduct a textual analysis relating to a research question of our choice. In order to perform the textual analysis, we were asked to use the computer programming language Rstudio, to run our corpora and train our models for extensive analysis. Within Rstudio, we utilized the word2vec package which operates as a word embedding tool that computes the semantic linguistic relationships between words by giving words a “number”. Through the different tools in word2vec, such as clustering, analogies, closest to, and plots (to name a few), we were able to train our models and perform different queries to get at our proposed research questions. 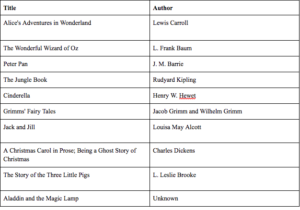 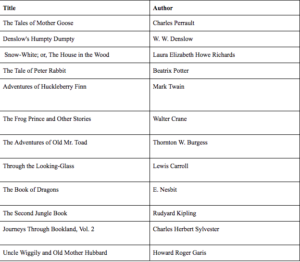 List of the ebooks that I used for my corpus


I wanted to have a broad perspective of the semantics in children’s literature, so I began my data collection by running the clustering tool in Rstudio. Under the parameters of 10 random clusters, with 10-word associations, I came across this initial cluster: 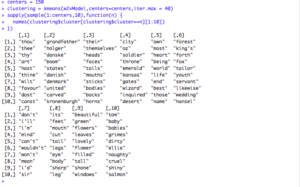 I was particularly interested in the sixth group because I thought that it related closely to my research question regarding power dynamics, which happened to be in relation to class. I decided to look at words closest to “servant”, to see what relationships would appear. 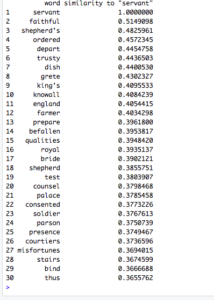 It was intriguing to see that the word closest to “servant” was “faithful”. I continued to look at the terms and I noticed that “king’s” was one of them, which for me referred to a sense of ownership and power. From here I queried more terms relating to gender: women, men, queens (which may be found in Appendix A below). In one of my searches regarding women and magic, I came across Glinda, the good witch from The Wonderful Wizard of Oz. After realizing that Glinda is a form of “positive magic” in the book, I wanted to see how men and women are portrayed in relation to magic in children’s literature. I decided to  perform these queries: 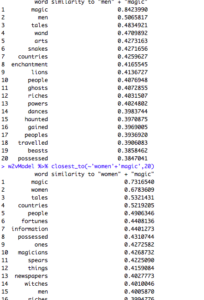 I thought it was interesting that words closest to “men + magic” include words that related to animals, such as beasts, lions, and snakes. On the other hand, “women + magic” included words such as fortunes, tales, witches, and riches. Coincidently, the term “possessed” appeared for both queries, so I decided to search for the closest terms to “possessed”. 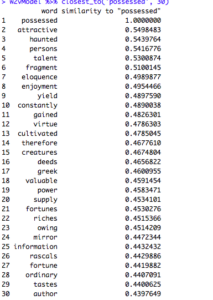 Two terms that took me by surprise were “attractive” and “virtue”. The other words such as “mirror, fortune, riches, and information” were all relative to “women +magic”. While the terms “creatures, persons, gained, and haunted” related closely to the terms from “men + magic”. In order to understand how power was relevant to the different perceptions of magic that are gendered in children’s literature, I decided to query the terms “virtue + attractive”. 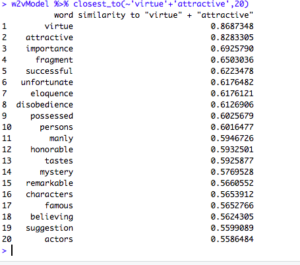 After performing this query, I noticed that virtuous and attractive components of children’s literature are semantically close to areas of importance and honor, but also the term “possessed” appeared again, emphasizing the relationship to magical beings (both men and women) in the stories.


Following my several searches, queries, and word clouds, I was able to discern from my data that magic in children’s literature is not always in positive and negative forms or good and dark, instead, it may be attached to gender roles. Men in children’s literature may have magic that relates to more animal-like qualities, while women are more closely related to witches, fortunes, and tales. I was also able to conclude from my data that magic is generally a source of power in works of children’s literature, and the characters that “possess” different forms of magic may be considered honorable, influential, and of importance to the rest of the book. Similarly, in the journal article Where Theories of Mind Meet Magic, the authors point out that “children as young as 3 understand that one cannot physically transform an object ‘just by thinking about it’ and it takes actual physical contact to achieve such results” (Woolley et al. 572). From this reading, as well as the results I received from my queries using word2vec, I am able to conclude that children are able to comprehend from children’s literature that characters of importance have to possess certain powers in order to be an influential figure and perform magic. Of course, through more research and a different approach to queries, there may be alternate agencies of power in children’s literature rather than just possessing a form of magic and virtuous qualities. Therefore, I leave this project to be continued for others to not only question the use of magic as an agency of power in children’s literature but to also forward my results and explore a different realm of ideas.

Appendix A (other queries) 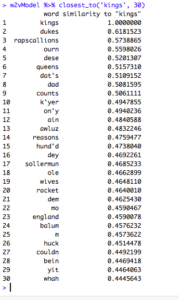 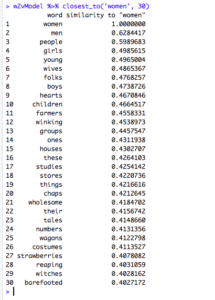 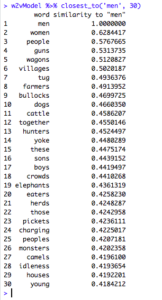 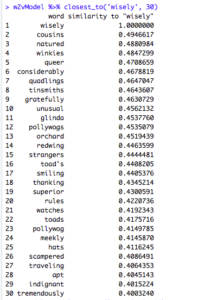 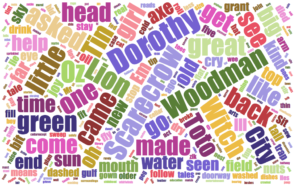 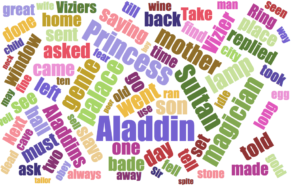