For as long as I can remember, I have loved Star Wars. Every single part about the series brought me hours of joy and excitement: the action, the characters, the drama, the creative setting, and the accompanying merchandise, all folded together beautifully to create an artistic tapestry of the world’s greatest pop culture franchise. It wasn’t until I entered high school and studied the original trilogy more closely for an extracurricular project that I realized a strange truth: there are hardly any female characters in these films, despite the fact that this cinematic universe hosts a huge and diverse roster of character. The only remarkable female character in Star Wars is Princess Leia Organa, a smart, brave, and beautiful heroine, who still manages to play the role of “damsel in distress” and sex appeal in each of the original three movies (in the third movie, she literally takes on the role of a sex slave dressed only in a bikini, to a giant space slug no less) This revelation prompted me to learn more about the women that ultimately led to the inspiration and creation of Princess Leia, namely, female characters of 1960s science fiction novels (20th Century Fox Home Entertainment). The objective of this experiment is to find the major characteristics of females in 1960s science fiction, compare them to those of men, and reflect on how these similarities/differences construct gender archetypes in the genre. Thankfully, word2vec models offer the ability to conduct this research, as giant corpora’s of text can extrapolate useful data from closely associated words, analogies, word clusters, and many other categories. This large-scoped approach to text analysis makes word2vec extremely useful for finding literary connections in collections of documents. 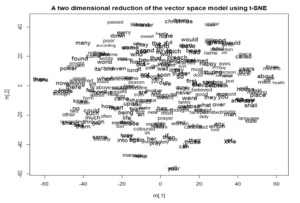 In order to extrapolate data from my corpus of science fiction novels, I used word2vec, an application designed by Professor Ben Schmidt of Northeastern University, which essentially allows users to take a large corpus, take unique words that appear often in one or more of the texts, and then produce a list of words ordered by the allocation of words most commonly associated with that unique word. The most common word models used in my research were “Closest To”, which takes a word and returns a list of terms that appear frequently with that word, and “Closest to the Space Between Two Things”, which takes two words and returns a list of words that are related to the first word but not the second one (Schmidt). 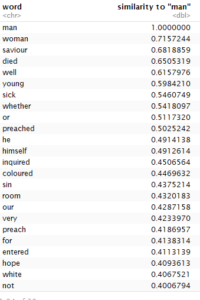 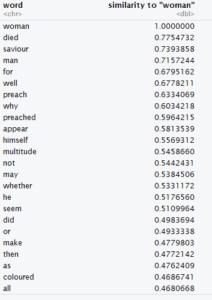 Before beginning my research into the corpora, I decided to learn more about the history of the literature I was reading. Most of my documents are from the 1950s – 60s, a time where science fiction publishers made the migration from pulp magazines and comic books to paperback books, which were inexpensive, easily distributed, and could more easily contain large amounts of content for the reader. This time period marks the end of what was known as “The Golden Age”, when science fiction was made mainstream. This transitional period for science fiction began with the end of World War II, and ended with the beginning of the Space Race, most likely due to authors starting to focus more heavily on engineering and science in their writing in order to inspire their younger readers to pursue a future career in the sciences (Yaszek 20).

After receiving background data on my documents, I began training my model to return information relevant to the construction of gender archetypes in the genre. My data was initially complicated by the fact that “man” and “woman” largely occupy the same vector space, so key differences were difficult to discern.

I observed that both vectors for “man” and “woman” are uncannily similar. The top four terms associated with “man” are the same top four terms associated with “woman”, albeit in a different order. During the time I conducted my research, I believed that the reason I was receiving such underwhelming data was due to the fact that “man” is a substring of “woman”, so I changed “woman” to “mother” and “lady” in hope to witness any significant changes. Luckily, my results were more fruitful this time. 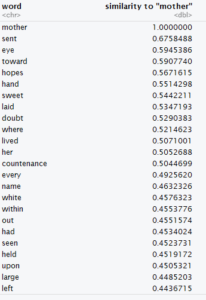 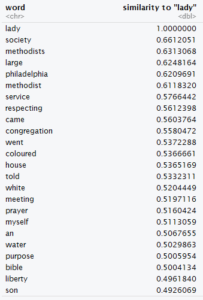 When searching for “man”, the results were relatively well balanced. Positive words such as “savior”, “well”, “young”, “colored”, and “hope” appeared often, and in addition, there were a few negative words, including “died”, “sick”, and “sin”. It is possible that this equilibrium of both beneficial and harmful terms could be a result of a mixed or equitable character archetype for male characters. The results for “mother” and “lady” on the other hand, returned almost exclusively positive and homely words, such as “hopes”, “sweet”, “respecting”, “purpose”, and “liberty”. Oddly enough, there was also a small amount of religious references, including “Methodist”, “service”, “congregation”, “prayer”, and “bible”. Furthermore, some of the terms found in both searches relate to family and domestic themes, such as “sweet”, “lived”, “society”, “house”, and “son”. Unlike the query involving “man”, which seems to deliver an ambivalent collection of both positive and negative terms, the female searches returned terms that are more often identified alongside compassionate, religious, and familial motifs. According to these models, the female word vectors appeal to the pathos of an audience more than the male word vectors. In addition to these searches, I also ran two pairs of the three selected words through a “Closest to the Space Between Two

My observations made within these four models reflected the same ones I made in earlier models. In both pairs, “man” is more closely associated with the terms “savior” and “sin” than “mother” or “lady” are. Conversely, “mother” is more correlated to terms that imply domestic and familial relations, like “lived”, and “sweet”, and “lady” relates to many religious allusions, like “bible”, “prayer”, and “preaching”. The searches that focus on feminine words always return overwhelmingly lighthearted and pious terms, arguably perpetuating a motherly nuclear family stereotype. Female words produce terms that imply matriarchal affection and a devout Christian practice, attributes that are commonly associated with the ideal conservative woman.

My research taught me that the 1960s science fiction character models for each gender can be very different. Men for example, appear to be morally ambiguous, as there are as many positive and negative similar words. For instance, two of the most commonly associated terms with “man” include the respectable title of “savior”, and the shameful term “sin”. On the other hand, women seem to exhibit only glowing features, consistently producing both sympathetic and pious descriptions. In the case of woman, it appears that the authors of these science fiction novels largely write women to reflect the same values of the traditional American woman: a loving mother and a god-fearing worshipper.

Although these rationalizations might seem counter-productive to the improvement of the female image in literature, it is possible that these characterizations were purposefully chosen for the desire to initiate political discourse. During the 1960s, it was very common for writers to incorporate satire in their novels. One of the most prominent scholars on this subject is Lisa Yaszek, a professor of the Ivan Allen College of Liberal Arts and author of Galactic Suburbia:  Recovering Women’s Science Fiction. According to Yaszek “Women used the conservative gender stereotype in a domestic setting in a humorous and satirical way: ‘By poking fun at the feminine mystique, [female] writers participated in a distinctly American tradition of humor whereby authors put seemingly lofty ideals and values in a homely context to deflate them’ ” (Yaszek 42) By using the platform of science fiction novels, feminist writers could create satirical characters for the purpose of engaging their audience with socially progressive motives.

At the end of my research, I have come to the conclusion that gender archetypes do exist in 1960s science fiction, and are largely defined by the males being enigmatic figures that can play the role of both savior and oppressor, and also characterize females as devout mothers and churchgoer, often for socially humorous and sardonic purposes. In an attempt to further the conversation for the revival of feminism, “…women turned to SF in the … 1960s because it provided them with growing audiences for fiction that was both socially engaged and aesthetically innovative.”(Yaszek 22) My research in 1960s science fiction has granted me an entirely new appreciation for the development of characters on the basis of their gender for the purpose of commentary.