There is so much information that can be gleaned from novels; they provide insight into the cultural settings of their times. But analyzing a novel by reading and re-reading can only go so far. With word vector analysis, there is so much more room for analysis, because we are able to use computer software to draw far more conclusions than one could do on their own.

Before I start discussing my use of these programs, namely R Studio vector mapping, I should make this quick disclaimer. I am a college freshman with little computer science experience, and a newcomer into the world of the digital humanities. Despite this, I was able to learn the basics quickly, and discovered how incredibly interesting this type of research is.

I’ve always been very invested in gender dynamics throughout time – it is easy to make the conclude that women have, for a long time, been under male oppression, because that is pretty obvious. But analyzing the shifts and nuances in gender relations is what is so rich in detail. This is especially true in novels, which is why I wanted to conduct research on novels of the Victorian era. This was a time when, obviously, men had more dominance, but female writers were prominent in that scene as well. The manner in which writers construct their novels is very telling of their views on gender, so I was very eager to analyze differences the ways in which male and female novelists conveyed gender differences in some of the most popular novels of the Victorian era.

My first step was to decide which novels to include. I wanted to pick the most popular novels from the period because they were so heavily digested over time, and they would demonstrate the most accurate ideas of gender, since they were in popular culture. Then I began to compose my lists of novels, or my corpora of works:

Jude the Obscure by Thomas Hardy

The Warden by Anthony Trollope

A Study in Scarlet by Sir Arthur Conan Doyle

The Strange Case of Dr. Jekyll and Mr. Hyde by Robert Louis Stevenson

The Egoist by George Meredith

As you can see, I have three more novels on my male author corpus than on my female author corpus. This is because I felt the word count for each corpus was more important. If a corpus does not have enough words, any word2vec analysis would be unreliable, and if one corpus has less words than another, the results from each model would not be able to be justifiably compared.

My next step was data preparation. I decided to take out only what I saw absolutely necessary, which ended up being just chapter and section headings, asterisks and underscores, and footnotes. There were footnotes in only one novel, and they were an obvious omission: they were editorial notes that defined words within the text, not part of the narrative; therefore, I had to delete them. My choice to delete chapter headings meant that I kept the chapter titles in the text, whenever they were present. While the headings provided nothing to the context of the novels, the titles were, in essence, part of the story, and the novels’ respective authors put thought into their phrasing. So, they were important enough for me to keep in my data.

After I chose which novels to include and prepared them for analysis, I thought about what exactly I wanted to explore in regards to gender. In my research, I came across a journal article by Robyn R. Warhol called “Narrating the Unnarratable: Gender and Metonymy in the Victorian Novel” that particularly opened by eyes in regards to my project. In her piece, she discusses how authors of different genders in the Victorian era seem to inherently write in different styles. She discusses metonymy, and how it was considered “lowly” in comparison to metaphor. She then highlights the fact that male novelists tended more towards metaphors while female novelists tended more towards metonymy in their descriptions, and how this unconscious difference between the genders in their writing highlights that women tended towards the “lowly” in their narration.

To begin my exploration, I decided to use a Word Trees Tool in order to get some ideas about what I’d be researching using word2vec. The first thing I thought about was basic verbs. I could assume that, in my male author corpus, male characters would be speaking more than female ones. According to this visualization of all the text in my male corpus that trails back to “spoke,” I was correct. 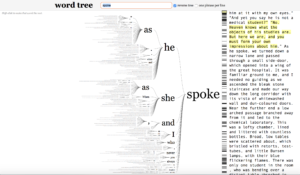 I was very curious to do the same thing with my female author corpus. Would female authors be more likely to give female characters more of a speaking presence? 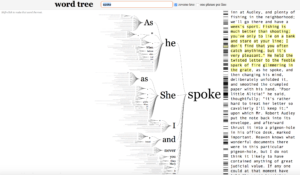 As you can see, the answer to that question is no. Despite the novels in this corpus having female protagonists, there are more references to “him” saying things than “her.” This, right of the bat, aligns with Warhol’s idea that female Victorian novelists and their female characters were lowlier.

My quick word tree research gave me the idea to look farther into characters speaking within the two corpora. Because I’m comparing things between genders, I decided that using the analogy function of word2vec would be particularly useful for my purposes.

I was very curious to do work with the word “said,” as I did with the word trees (except a more general synonym). I wanted to see what kinds of words each gender of novelist used to convey that different genders were speaking.

Beginning with the corpus of male authors, I plugged in the analogy, “he is to said, as she is to…” to see the ways in which female characters spoke, in terms of men.

These results are incredibly telling! The top result, other than said, is “cried.” This implies that men wrote their female characters as often being frantic and losing their cool, crying out in response to situations. There’s some lowliness. The next result is “replied.” This implies that, very often, women speak when they are spoken to. There’s some more lowliness. It’s amazing that so much information can be gleaned thanks to online data programs like word2vec.

These results are very interesting to pore over, but really, I don’t think it would shock anyone if they were told that male Victorian novelists wrote their female characters to be lowlier than men. What got me excited was to load in the female author corpus and compare my results with the same analogy.

These results are oddly similar to those from the male author corpus. “Cried” and “exclaimed,” the top results for both analogies, are synonymous. “Replied” and “answered,” which are both near the top of each list, are also synonymous. These results also reveal that women spoke or acted “reproachfully” often.

These results very accurately describe the lowliness of women that Warhol describes in her article; although I was very surprised to see that womenwent along with the notion that they were of lower status than men and subsequently placed that lower status onto their female characters. I would think that they would be more empowered.

The next word I wanted to research in this way was “took.” It is a very empowering word, and I was very interested to see if the same phenomenon with lowliness would occur.

I plugged in the analogy “he is to took, as she is to…” with the male author corpus and found this:

Look at this! While men took, women gave! And kissed (men)! This search is so illustrative of male dominance in male authored works – I expected results that would indicate that dominance, but not to this degree.

And what about the same analogy in the female author corpus?

Something to notice is that many of these words are related to clothing or “the home” as a concept. The top result, though, is “put,” which is an active verb that does not contribute to the lowly idea. As you can tell from the list as a whole, though, women still create female characters who are lowlier in general. In this case, it is clear from their strong association with the domestic sphere.

Using these very basic verbs in wrod2vec, I am able to further corroborate Warhol’s claim that Victorian women in novels were consistently written to be lowlier than men in the novels of popular culture at that time. As for future research in this topic of Victorian era gender, I would be fascinated to learn more about verbs – activity and passivity in particular. Wouldn’t it be great to do a large-scale analysis, like this, on whether women do more things than are done to them? Or vice versa? In novels by men and women? There is so much that can be interpreted from such simple things, like verbs, that speak volumes about gender and popular culture, in any era.