My grandmother was born in Bari, Italy in October of 1929. She was 20 years old when she left for the United States of America, later giving birth to six children––the youngest of them being my mother. At family dinners, our large crew would gather at two tables (unable to fit on just one) to shove down focaccia bread, manicotti, and biscottis, alongside our after-dinner espressos. I would listen to my grandma go on and on in her Italian accent, wishing I could understand even just a little bit of what she spoke.

In April of 2019, three years after she passed, I was able to visit Italy for myself. I joined my high school’s Italian club freshman year, and headed to Rome in the spring of my Junior year. While all the cities we visited were amazing, I had an uncontrolled elation when we arrived at our last destination––Bari, Italy. I felt connected to my grandmother in ways that were much stronger than in America. I was even contacted by my grandma’s nephew, Francesco, and ended up meeting him, his mother, and his two beautiful daughters. The opportunity was inexplicable.

While my family’s history is a major part of my motivation behind this project, it is only one half of the story. Growing up I always had a fascination for the unknown––my love for fantasy novels, space and time travel, the deep oceans, and the cultures from the other side of the globe. Almost everything I do is motivated by curiosity, and a lot of the time, confusion. In 4th grade we were asked to pick a major figure in history, dress up as them, and give a presentation on their significance. While this project wasn’t anything major, I can still remember combing through the names at the bookstore, eager to find someone that drew my eye. I landed on a fifty-page book on the life of Amelia Earhart. Since that presentation in fourth grade, I’ve dove into the mysterious world of aircraft disappearances. Most recently, I’ve watched documentaries on the Malaysia Airlines Flight 370.

So, given my admiration for my Italian background and airplane disasters––a weird combination to say the least––I was completely enthralled by the news articles I found surrounding a Dutch plane crash off the coast of Bari, Italy. Below I explain the details.

History of the Crash

On June 23rd, 1949, the Lockheed L-749 Constellation from Royal Dutch Airlines went out of control and dove into the Adriatic Sea. The four-engine aircraft, which left Cairo Airport heading for Amsterdam, went down along the east Italian coast while flying at an altitude of 5,000 meters. Before hitting the water, the tail broke off and the aircraft flipped upside down. The wreckage sank and only a few debris were found. The thirty-three occupants aboard were all killed. There were no survivors. The exact cause of the crash is unknown, but there are theories that a passenger’s suitcase housed an explosive device. Experts also believe it could have simply been the automatic pilot system failing.

The two articles I pulled from ProQuest (linked at the bottom of this post) both summarize the events of the crash. The language used to describe the killed passengers and the falling of the plane, is very blunt and nearly insensitive. I thought it would be interesting to bring together words from both these articles––mostly verbs, nouns, and adjectives––to create two remixed poems which illustrate the crash within this dark light. 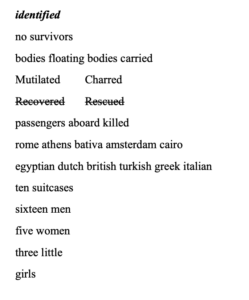 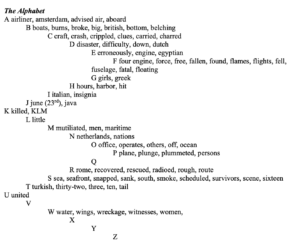 For my first poem “identified,” I wanted to focus on the passengers of the plane. I used words that were directly associated with the description and/or uncovering of the 33 bodies that were a result of the crash. The word “identified” itself was found within the articles and I thought it was a perfect title for the intention of my poem.

I made the decision to only capitalize four words: Mutilated, Charred, Recovered, Rescued. These words seemed most important to the articles’ writers when describing the floating bodies that were taken to the shore. I was inspired by the “strikethrough” technique used by M. NourbeSe Philip in Zong! While the people were pictured as recovered and rescued, they did ultimately lose their lives, which is why I chose to cross out those words. There were also many numbers in both articles which listed off the stats of the lost lives. For example, they were categorized by nationality, age, and gender. I decided to list those attributes out in the poem as well.

As for my second poem, “The Alphabet,” I originally wanted to structure this similarly to my first poem, however focusing on the alliteration of all the words I found. In the early stages of constructing the poem, I ended up ordering each word by their first letter. I realized it was an interesting perspective on the words I pulled, and it gave the poem an easier flow––as each word essentially flowed into the next.

After placing everything I pulled into their lettered groups, I realized not every letter had matching words. However, I appreciated the look of having blank lines scattered throughout. I also appreciated the last lines “X/Y/Z” being relatively blank. The “zig-zag” of the poem’s lines reminded me of an airplane diving down through the air, so I made a choice to keep that structure as well. Overall, my idea with this poem was to gather all the verbs, nouns, and adjectives I could, and illustrate the literal action of a falling plane.