Creating remixed poetry was a really interesting and creatively challenging experience for me, as I’m much more comfortable in prose and I had to figure out how best to make the medium work for me and the creative ways I wanted to go about expressing the narrative I was trying to tease out of the given original texts.

My first archival document relates to the place I’ve grown up in since I was five years old: South Brunswick, New Jersey. I went digging deep in the South Brunswick town archives, maintained by the South Brunswick Historical Committee, a small group of history enthusiasts and longtime town residents. I found a footnote in an excerpt from a book the town historian is planning to publish, and following that trail, I found a document in the Rutgers University library. It’s a “master plan report” for the township from 1961, created by the city planning board, and details many things like the physical features of it, public facilities, economic comparisons, and more. It likely ended up in the Rutgers archive because the main Rutgers campus is in New Brunswick, New Jersey, which is only fifteen to twenty minutes away, and it’s a major state university with an extensive library capacity. I took a particular interest in the regional influences and the planning policies that the plan lays out, and goals/future growth plans that it lays out, as I thought I would try to tackle themes of growth (whether familial or spatial) in the poems I wrote.

My second archival document is about the place where my parents are from, India. I chose this document because it contained references to the cities Hyderabad (where my dad is from) and Secunderabad (where my mom is from) in the state of Telangana in South India, which was part of the state Andhra Pradesh at the time. What’s striking to me about this one is that I found my document through the British Library’s catalogue, which led me to the Linguistic Survey of India site (which, if you’re curious, was a survey started by a British linguist in the elite ranks of British officers governing India). I originally tried the Indian National Archives, but they have much stricter archival access and require much more information and documentation. They also don’t seem to have many historically relevant documents about India in comparison to the British Library. The history of the British Library and its relationship to Indian documents is a long and storied one: one of the earliest additions to the library was the India Office Library and Records, which is a collection of documents about the British rule of India from 1600 to 1947. The British Library originated as a part of the British museum, which is notorious for its collections from colonizers stealing things across the British empire. This document is the 1971 Indian census combined with an India-USSR collaborative study on regionalization in India (I tried to find something in a relatively similar year range to the other document, and the 70s are around when my parents were born). I took interested in the language this specific document uses about the “building activities” and the way urban sprawl has affected living conditions. 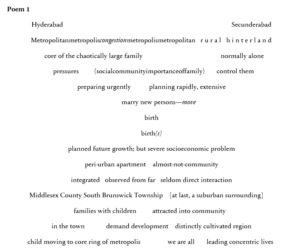 My first poem is about my parents, who are two very different people from very different backgrounds, and their journey to building a new life from their old one in India to their new one in America. I wanted to show the way they have homes in two different places, and show my identity in the intersection. I feel like I’m, in a way, coming full circle to the place my parents came from by moving to a big urban city. To create this first poem, I placed constraints on myself that dictated that I couldn’t re-use any of the words I’d used before. I wanted to do this because I wanted to treat the words like bricks: once one had been laid, I would have to put a new one down. I didn’t repeat anything unless there was a new instance of the word within the text itself. I also made use of whitespace and general spacing, as I wanted the visual aesthetic to reflect the story I was telling. The lines in the beginning are aligned on two opposite ends (the left being my father and the right being my mother), the places they come from, and the middle being their shared experiences (and me). The rest of the lines after the births of both me and my sister are all centered and close together, reflecting this as a common path they shared. The poem is shaped a bit like an hourglass which marks the passage of time: if you turn it over, it starts over again, indicating that many elements in my life have been already played out in the lives of my parents. 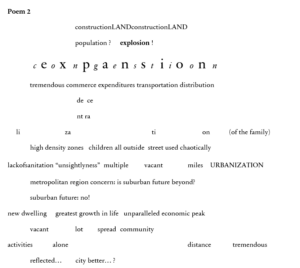 My second poem is about the rapid urban growth my father experienced when growing up and then where he dreamed of living (the classic white picket fence dream, in America), as well as how my parents feel about it now. My maternal grandfather was an Indian civil engineer, and my paternal grandfather was also an Indian government worker in public works, so I have that connection to both these documents, and reshaping it to tell the story of the land itself and then getting into the specifics of the experience living on that land was interesting. I experimented even more with both form and structure in this one, using different font sizes and more drastic spacing, really playing up the visual nature of looking out at your home and seeing all the ways it’s changing. The process of creating this poem really made me reflect on the reasons my parents left and the lonely reality of living in a completely different country than 90% of the relatives that would come in and out of the door all the time, and the tradeoff for a supposedly better life. After over two decades in this country, my parents want to retire back in the one they and their families came from.

The narrative I wanted to create from these documents, which are all about how land developers and planners thought the areas would play out, were meant to show the realities of living in these places and the stories of a family living in the areas that are so detachedly described in vague and numerical terms. There’s a lot of passive language in these documents, which I restructured into more active terms, giving my family agency, as my parents did everything they could to fend for themselves, carving out their own path and building the home they dreamed of in the country they longed to live in, as well as the realities of ending up living there.