I have been going to the same beach and same beach house every summer of my life, as it has been cemented like a family tradition. My mother and her sister and friends went to the same beach since the 70s-80s, and I will likely continue to go with my extended family as time goes on. I wanted to create poems surrounding this beach because of the great history and place it has in my life.

The beach community itself is named Middlesex, named after a county in London when it was first being incorporated. The two archival documents I have chosen are from the beaches governing documents, the Certificates of Incorporation and Covenants. Both of these documents are legal documents and contain a lot of legal jargon. 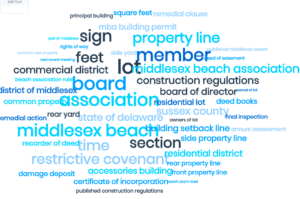 From a constructed word cloud of both texts, the most popular words in both these documents were “Middlesex Beach”, “Restrictive Covenants”, “State of Delaware”, “Board of Directors”, etc. This presented an initial challenge in coming with themes to talk about with being limited to very formalized rules and being very different than regular documents in their linguistic patterns.

The Certificate of Incorporation contained words relating to the forming of the community, and the varying rules in a business sense. It included member provisions, board of director information, financial agreements, etc. I combined my texts into one, but I extended the concept of a private community to its history and the exclusivity of obtaining a property. A lot of generational wealth is created by owning valuable assets, which in today’s sense, means buying property when it was much cheaper. In the 50s, not many people had access to that money or opportunity to buy land and it becomes a cycle. Today, it is much harder to obtain an affordable mortgage with regular jobs and no windfall. Having the advantage 50 years ago definitely helps today those families. In the 50s, an oceanfront lot cost $9000, equivalent to about $85,000 today. Indeed, there was a recent story where a black family’s beach property was taken during the Jim Crow Era and they are fighting to get it back because it’s a possible valuation of $75,000,000. The oceanfront properties at Middlesex sell for at least 2-5 million dollars today. While we personally don’t own property, we have been able to go to the same house because of a relationship with the owners. My mother was able to go because her friend’s family had owned two properties in the community, which they recently sold. I do want to note, that I don’t fault Middlesex for this issue, but it is something to be aware of and conscious of. 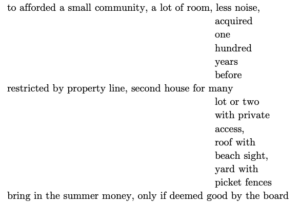 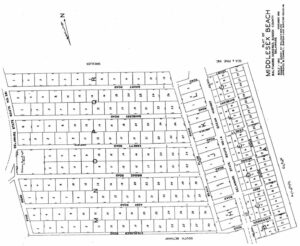 to afforded a small community, a lot of room, less noise,

acquired one hundred years before,

restricted by property line, second house for many

bring in the summer money, only if deemed good by the board

This poem is modeled after the layout of the ocean-side houses.

Secondly, I tried creating a poem that was more sentimental in value. The Covenants contained a lot of restrictive information and specifications of property sizes, noise ordinance, dwelling layout, etc. I combined the idea of structure and repetitiveness in both the content and layout of my poem. I used a lot of structured language and sentiment to mimic the established routine each summer has. In Summer, we drive down certain highways, make certain turns, certain actions every year. Lastly, I created a cyclic structure of the poem with no real end as it happens every summer. I also placed text in the middle to highlight the perpetuity of this routine.

I wanted to incorporate more emotion and sentiment value but it was difficult due to the legal nature of the document. 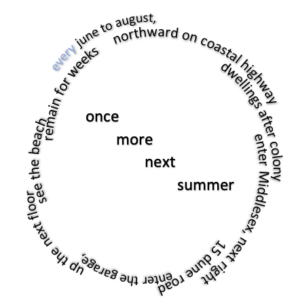 every june to august,

the dwellings after colony,

enter in the garage, up the next floor

once more next summer

It was really difficult at first to create poems, given the nature of my documents and my goal to incorporate a sentimental feeling.  Legal language contains different vocabulary, syntax, and semantics, as well as being as objective as possible. Some lines do not make the most sense in meaning due to variations “To afforded..Acquired, etc” vs. “To afford … acquire”. I was able to compensate for this difficulty by making specific layout decisions. (More so with the circle structure but nevertheless) that contributed to the overall meaning.

Remixing the poems also forced me to really read closely at the document and understand the motivations within the text. For my documents, it was for legality and regulation, but more historical articles could lend to more hidden meanings. It can also allow the user to subvert the document’s purpose, as M. NourbeSe Philip did in ZONG!. It also allowed me to analyze the history and context surrounding the document. While reading up the history of the texts and the beach, I was able to connect it to generational wealth and property, which is inherent in a lot of “private” communities (schools, housing, etc.). When I go to the beach, frankly, I never have really have thought about the houses in the specific context of ownership and valuable land they lay on.

This assignment also circled back to the idea of editorial decisions, with textual and layout choices of the chosen poem. Poems are usually written to convey in-depth commentary around social issues, focusing heavily on the language within to create meaning. In creating these poems, I had to choose whether I wanted to highlight a particular issue, subvert meaning, or express something totally different.