As a little girl, I was always the kid eager to roll around in the mud with the pigs at the petting zoo. I loved learning about and interacting with as many animals as I could. I was hit with genuine confusion when my friends would come over and shy away from petting my dog. What is there to be afraid of?

As I scroll through my home pages on social media, I stumble upon adorable animal videos. Some are puppies while others are lion cubs, raccoons, or panda bears. When I would go show my father the cute video of the raccoon falling out of a trash can, he would respond with something along the lines of, “Seriously? A raccoon? You watched too much Disney growing up.” When I’d ask him what he meant, he explained that the child-like representation of animals in Disney movies were clearly messing with my head. To me, the raccoon was something to cuddle with, but to him it was dirty and dangerous. This small interaction is what sparked my idea for the following research.

I decided to gather 13 texts––all the original written tales behind famous Disney films––and examine the portrayal of animals in these stories and fairytales through word vectors. More specifically, I chose stories that were centered around animal characters. For example, The Jungle Book by Rudyard Kipling only has one human character, the rest are bears, tigers, monkeys, snakes, etc. Listed below is my full corpus.

Tarzan of the Apes by Edgar Rice Burroughs

The Jungle Book by Rudyard Kipling

The Merry Adventures of Robin Hood by Howard Pyle.

Beauty and the Beast by Marie Le Prince de Beaumont

The Blue Fairy Book by Various

The Adventures of Pinocchio by C. Collodi

The Thousand and One Nights, Vol. I. by Anonymous

My first instinct was to support my father’s claim about me and show how the representation of animals in these stories ultimately desensitizes a child’s perception of animals and their relationship to human beings––a blurring of the fantasy-reality line. James Serpell from Society & Animals iterates this idea clearly when he writes, “To some extent, adult society may have constructed an idealized world of childhood populated by “animal friends” that bears only limited relation to children’s spontaneous or unindoctrinated perceptions and inclinations about animals” (1993). Serpell also brings to light interesting studies on empathy and childhood pets. I decided to run a “closest to: ‘boy’ + ‘pet’” query on my trained model in RStudio. The results are below.

The word “behaving” appeared in the top 10 closest words. This is interesting because it aligns with Serpell’s comment on his “Childhood Pet Keeping and Humane Attitudes in Young Adults” study: “pet ownership in childhood was associated with less negative attitudes to some other animals such as lions, pigs, chickens, and snakes. Similarly, Paul [Serpell’s research partner] found strong statistical associations between child-hood pet keeping and humane attitudes and behavior in adult life” (1993). In light of my own childhood––growing up in a dog-loving household––and my continued fondness for all types of animals, despite their known danger, Serpell’s research greatly supports my father’s previous comment.

While my original intention was to only support this positive view and influence of animals in children’s fairytales, I found that the querying of my trained model gave way to various results. After running a “closest to: ‘animal’” query, I found that the results went against my previous observations. The words similar to “animal” were aggressive and negatively connotated. This was true for two other clusters that appeared within my corpus. The associated words casted animals within a dark light. The results are seen below.

I decided to do some further research into the negative side of Disney and Folklore’s representation of animals. I found one work by R.R. Stanton titled, “Representations of animal harm and objectification in the works of Walt Disney Animation Studios’ films: 1937-2016.” This analysis revealed Disney’s extensive relationship with calamitous animal representation––like the inclusion of animal skins furs, and meat. It also led me to consider the social implications of each animal character within Disney’s movies. For example, Stanton talks about rats often portrayed villainously while dogs are loyal and pro-social characters. In Disney’s Lady and the Tramp, a rat is chased and killed by a dog––this action is portrayed as justified because of our social biases surrounding each animal (Stanton).

I worked with other web-based tools, and I found an interesting association surrounding the word “people” and “jungle”.  After pasting The Jungle Book by Rudyard Kipling into WordTree and playing around with the site for a bit, I stumbled upon the results pasted below. 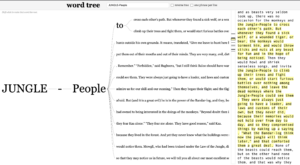 The sentences that included the hyphenated word, “jungle-people” had the most enlightening results. Phrases like “climbs up their trees and fights them,” “afraid,” “hunts outside his own grounds,” and “they fear” gives way to the kind of representation of animals within this particular work.

I did a similar search within WordTree, but this time using Tarzan of the Apes by Edgar Rice Burroughs. Tarzan, a boy who was abandoned as a child and raised by the apes of the jungle, was described in an animalistic manner throughout most of this story. This is unsurprising given he had no human upbringing, but the results were still insightful, nonetheless. 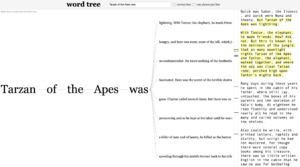 According to these results, Tarzan is depicted as “a killer of men and of beasts, “no sentimentalist,” “fascinated,” and “hungry.” Again, we see the negatively connotated diction surrounding animals. This example is particularly useful because the plot of Tarzan of the Apes. This shows us what humans think would happen to a little boy if he was raised by jungle animals. Although the depiction is hostile, it bridges an interesting gap between humans and animals. This can show that at our most foundational level of existence, humans are animals too and can be subject to the same ravenous endeavors given the right circumstances.

I also found that these results from WordTree aligned with another cluster that appeared within my corpus, which is attached below.

While my research wasn’t exactly linear, I feel it brought me to some interesting discoveries about the representation of animals in Disney films, as well as further moral implications surrounding these children’s stories. There is a lot more than can be said through this topic for research. If I were to conduct this research again, I might use a second corpus featuring Disney’s rendition of these original stories to create a comparison in the way animals are represented. It’s no doubt that some of these “children’s” stories, go far beyond child-like topics. Stories like Beauty and the Beast, touch upon important binaries like moral character and success versus wickedness and misfortune.

I think using the word2vec algorithm alongside other web-based word vector tools, gave me some interesting results to work with following the readings I did. However, I do think there were some limitations to working with my particular corpus. It’s difficult to make any solid conclusion about the influence of animal representation in Disney movies on children development because of the many variables affecting the situation. I tried to explore as many possible routes as I could to ensure I touched on more than one influencing factor. While word2vec strategies pave the way to important discoveries about these literary works and their subsequent films, I think a less structured approach would ultimately lead to more detailed results. To research more about societal influences on the interpretation of these stories, I would need to do more close-reading and research on the context surrounding each text.

Psychologists for the Ethical Treatment of Animals. Society & Animals : Social Scientific Studies  of the Human Experience of Other Animals. (1993). Web.