To provide a general overview, Existentialism is a field of philosophy made popular by European philosophers during the 19th and 20th centuries. It’s a school of thought that is often compared to a way of living, focusing on the individual actions and emotions of a person to bring meaning to their own life and development. It’s the idea that we’re given free will and choice, and that what we do with our choices is what gives meaning to our existence. In understanding that our lives our given meaning by our own actions and emotions, Existentialism is often associated with an atheist mindset. After all, how can one be given meaning in their own self via their own actions and abilities if they have been so heavily influenced by a higher power?

Obviously then, we must understand what the Existentialists say about man and God, before we can understand its differences from Christian faith.

Their is often a contrast between this idea of Existentialism and religion, specifically Christianity, due to this idea that if we are truly to place meaning into our own work and actions, than we can’t be expected to place belief into something that isn’t measurable or understandable. However, there are also arguments that argue for the similarities of Existentialism and Christianity, arguing that humanity’s belief in a higher power is a way for humanity to accept living, the end of life, and that both are a way for humanity to accept its existence.  This brings me to my research question, “How similar is Western Existentialism and Christianity with regards to the meaning of life, and how do they differ?” By using the R coding language, Word2Vec, and other various literature analysis tools, I hope to gain insight on their relationship, as well as to compare it to past research and both sides of the argument.

For my research I primarily used word vector analysis using R studio, a web-based tool that could look through text files and train a model. With this model, it can identify word associations, groups of words that are often linked together, and determine how related different words are and how frequently they are related. With this trained model, it allows a user to input queries, involving a specific word and what words are most often associated with that word. It provides a powerful way to understand the context in which certain words are written with. For this specific research question, I needed to compare two schools of thought, so I prepared two separate corpuses. The first, centered around famous works from Existentialist philosophers include:

The second was focused around Christian texts, in which I only included:

By removing unnecessary pieces of text such as introductions or translator’s notes, we can filter out each corpus to be the pure written text, allowing for a more accurately trained model.

I entered queries related to my research question to identify several things. Firstly, I wanted to identify what exactly each field associates with life, including its purpose and meaning. Secondly, I wanted to analyze corpuses desires and wants. Lastly, I wanted to see each side’s association with god, or a higher power with regards to how life is lived. When reading the information, a higher number on the right side means a higher correlation in which the words are related.

1. The Meaning of Life 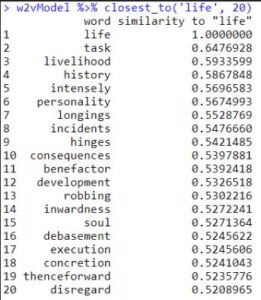 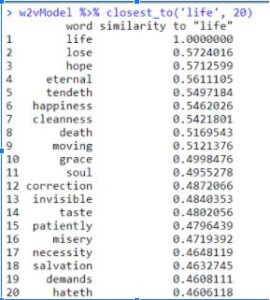 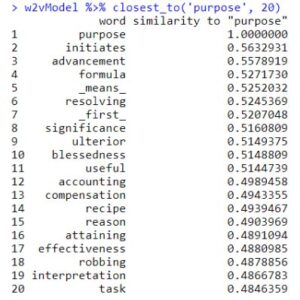 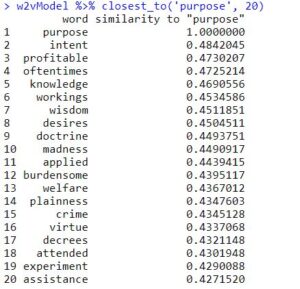 The first area I wanted to identify was what exactly each school of thought associated with the meaning of life. For this, I queried “life,” “purpose,” and “meaning + life,” for each corpus. For, existentialism, “life” seems heavily associated with occurrences and events that occur during life itself, with “task” being the second highest associated word, along with other words such as “livelihood, ” “history,” and “incidents.” This is opposed to the religious corpus, in which life is more associated with more ethereal subjects, such as “lose,” “hope,” “eternal,” and “death. This is already a clear distinction that can be understood by analyzing both trains of thought. After all, existentialism focuses on growth via the events that happen via personal choices, whereas in the Bible, actions and choices are more influenced by what one looks forward to after life, in death. The “purpose” query, doesn’t seem to yield much info, with all word associations being on the lower side, likely since the word itself is more commonly associated to physical things rather than the more abstract topics we are looking for. This brings us to the “meaning + life” query, in which there exists a strong contrast. In the existentialism field, these words are most often associated with accomplishments, a sense of fulfillment, and the actions one takes. This is heavily opposed in the religious field, where the meaning of life is more associated with morality, the possibility of paradise, and this continued idea of a happiness after death with the words, “eternal” and “resurrection. 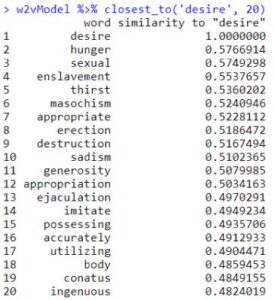 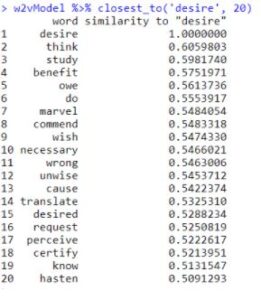 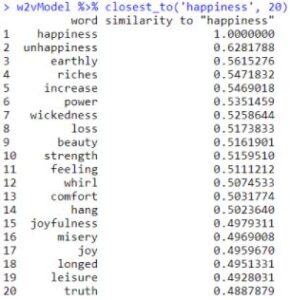 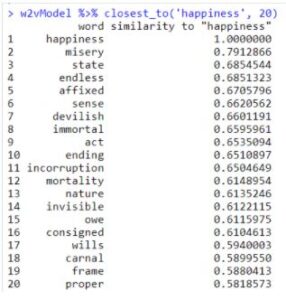 These queries were inputted in an effort to describe how each field of thought derives happiness and wants in life, with “desire,” “happiness,” and “happiness + meaning.” For “happiness” and “desire,” existentialists tend to focus on more carnal, base needs, including hunger, sex, riches, beauty, strength, and power. With “happiness + meaning,” existentialists again look at this idea of fulfillment, value, and significance. The religious corpus tends to look more at moral desires, with a general sense that happiness comes from doing things for other people, as seen in the words, “owe,” “do,” “marvel,” and “benefit.”

3. Existence of a Higher Power 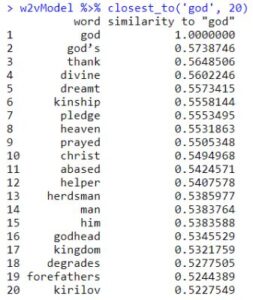 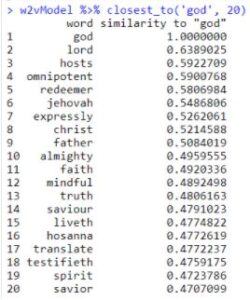 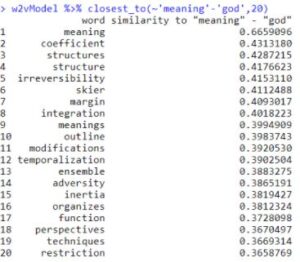 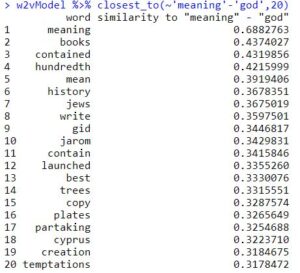 This last set of queries was meant to identify the important of a God in life and its purpose, using queries, “god” and “meaning – god.” For “god” the results are mostly similar, including that this is a figure to be worshipped and be grateful for. Despite the existentialist focus on humanity, it seems that field still acknowledges a “god” as a type of guide for humanity. Yet, when looking at the existentialist corpus for “meaning – god,” there is a large amount of words regarding structure, such as “outline,” “structures,” “modification,” and “integration.” It can be interpreted as, without “god,” meaning is more found through the structures and hierarchies that humanity as a whole creates. This is largely opposed to the religious corpus, which has very little word association with the elimination of the “god” context from “meaning.

In Relation to External Research

Existentialism, with its concentration upon man, has difficulty finding God anywhere.

The opposing argument within, “A Comparative Analysis of Christian and Sartre’s Existentialism” by Obioha Precious Uwaezuoke, state that Existentialism and Christianity are fundamentally the same in that they both put humanity first, but the end-goal for which a person lives is different.  He argues that both fields of thought focus on the reality of the present, but where existentialists focus on doing so for their own self-fulfillment, Christianity does so in attempt to appease God.

In other words, what should be the role of man in the pursuit of the realization of his destiny?

With the research collected from Word2Vec, it does seem that there are more contrasting elements. Even though it was shown that both fields do acknowledge “god” and do put direct action first, they vary. Existentialists actions and deeds seem more heavily correlated with biological needs and events, whereas Christianity focuses more on moral actions. Both fields are methods of living and understand one’s purpose, but their exists a fundamentally different approach that comes from the full or obscure belief in a “God.”

Although their exist similarities in how Existentialist and Christian texts view God, the approach to how one lives and should live is vastly different. If I were to look into further research, I would compare more existentialist texts to different fields of religion. It seems the fundamental differences stem from this idea that a higher, ethereal power, even exists, and I would like to replicate these differences with other forms of religion to confirm this idea.